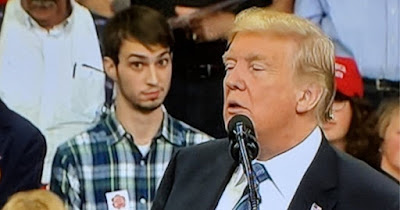 I was thinking about Plaid Shirt Guy yesterday, the young man removed from a Trump rally the other day for his apparent lack of enthusiasm and his honest reactions to the President's bilge. This modern day Maynard G. Krebs had been given a red MAGA hat and told to cheer but evidently wasn't feeling it.


"When I got back there, I knew that I was going to be genuine. I was going to give my actual reaction to the things he said. So whenever I disagree with him, you could tell that I disagreed. But whenever I agreed with him, you know, I clapped," Linfesty said. At one such point Thursday night, Linfesty was spotted mouthing the words, "Have you?" in response to the President's claim that he has "gotten a lot of support" in the wake of the anonymous New York Times op-ed author and the writer's claim of a "resistance" within the Trump administration." Before the rally, they told us that, you know, you have to be enthusiastic and be clapping and cheering for Donald Trump. And I wasn't doing that because I wasn't enthusiastic and I wasn't happy with what he was saying.

At some point in the rally a woman walks up to him and tells him that he is now officially history, his shunted of and she takes his place behind the orange one. His two friends are also removed and he undergoes a ten minute interrogation with the cops and Secret Service backstage. 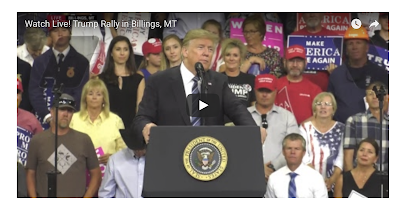 Interesting how quickly and seamlessly he was replaced by a smiling face from central casting that could get with the program.

I had two three principal reactions. The first was just how tightly scripted these political events are.

The second was how white the crowds always are at Trump's rallies and in light of the intense control and level of scripting, how this has to be a conscious decision on the part of the administration.

The third reaction was McLuhanesque, how completely manipulated we are by our politicians. My mind kept going back to this particular scene from the excellent 1997 movie, Wag the dog.

Good for Plaid Shirt Guy for giving us a moment's respite from the bullshit factory.
Posted by Blue Heron at 10:41 AM