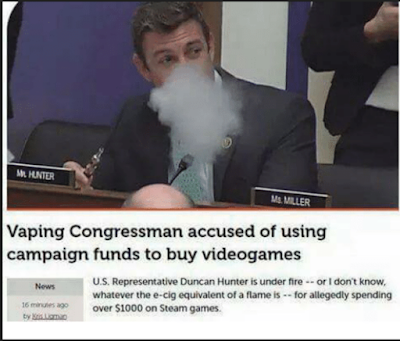 Young Duncan Hunter, my Congressman in the 50th district, is really making his mark in Washington.

I'm trying to keep this straight, was it six mistresses total or six in Washington D.C. and one here? Bet he has a Hef style smoking jacket laying around somewhere.

Guess he was bunking down for his amorous trysts at the trendy but aptly named Liaison Hotel. Nice. He of course calls the hubbub a politically motivated witchhunt.

One thing to raid the campaign funds but all this booty, Duncan? You madman, I want to party with you.

I guess when John Boehner tells you that you have a drinking problem, well...

...In addition to the statement, Hunter’s campaign released an Aug. 6 letter to the Justice Department in which Hunter’s attorneys argued that issuing an indictment after the primary but before the general election would effectively hand the seat to Hunter’s Democratic challenger, Ammar Campa-Najjar.

The letter by Hunter attorney Gregory Vega to Deputy Attorney General Rod Rosenstein called for a delay in the expected indictment.

Among other things, Vega alleged that U.S. Attorney Adam Braverman should be recused from the investigation because of a perceived conflict of interest.

But something not mentioned in this week’s indictment regarded what Vega called “personal indiscretions of the congressman that the prosecutors seem intent on charging. (The prosecutors even said they have ‘pictures’ to prove it).”

The attorney added: “While there may be evidence of infidelity, irresponsibility, or alcohol dependence, once properly understood, the underlying facts do not equate to criminal activity; these allegations are, however, intended to embarrass and humiliate the congressman shortly before a crucial election, and also to alienate him from his wife, the only other person under investigation and his intended co-defendant.”

I guess young Duncan was even banging one of his staffers. Didn't your pop ever tell you to keep your pen out of company ink, Dunc ol' boy? Probably meaningless, in my district he will gain support and pick up votes for his wanton carousing and philandering. He's in, faster than you can say Mike Flynn.

The indictment is worth reading.

• $42 for what appears to be an Uber to Individual 17’s residence and an Uber pickup at the same address the next morning.