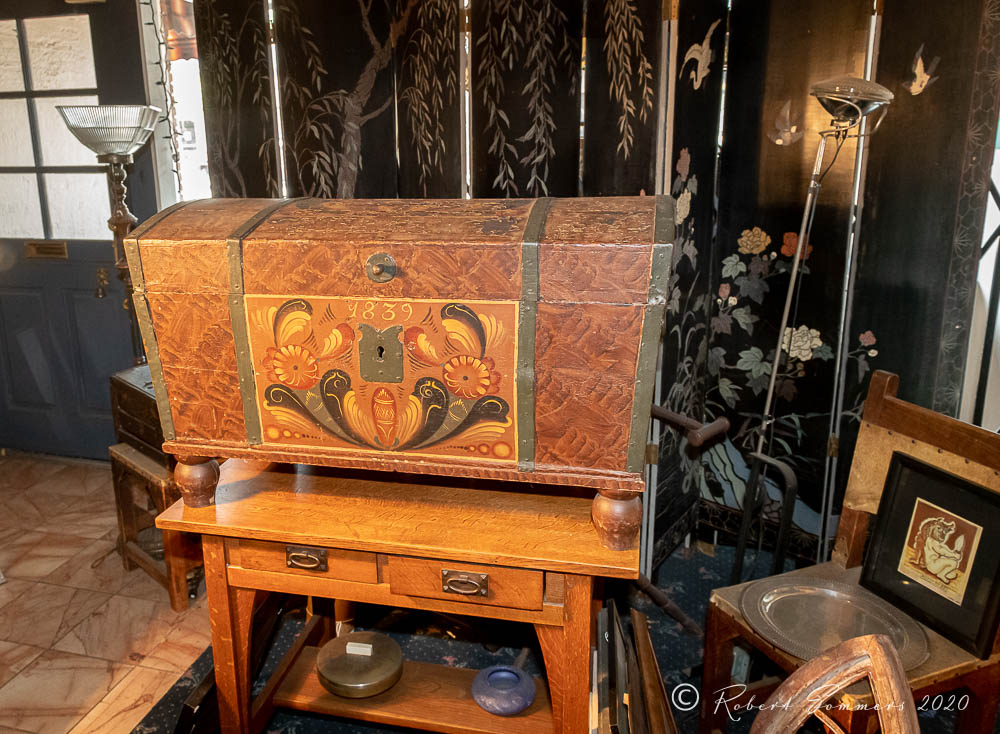 I was in San Diego recently visiting Bob Longdyke and picked up this old trunk. Bob is one of the most knowledgable people you will ever meet  in the antiques business, his house is a museum and I have always felt honored to learn from him. 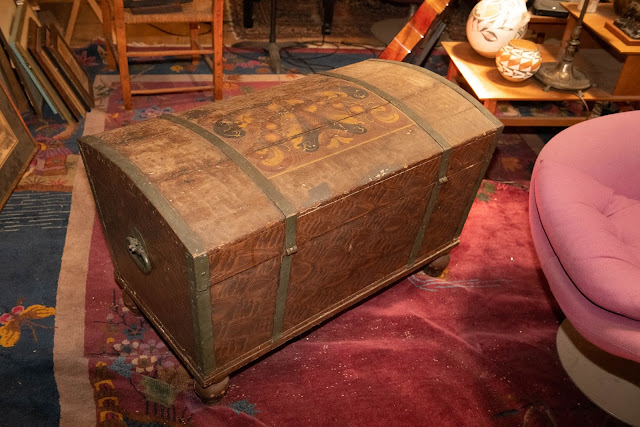 Absolute brilliant man on so many subjects and there are so few people of scholarship left that I can say that about. Anyway he was selling a few things on his patio and my eyes alighted on this old chest. A big and heavy trunk, 38 x 22 x 20." 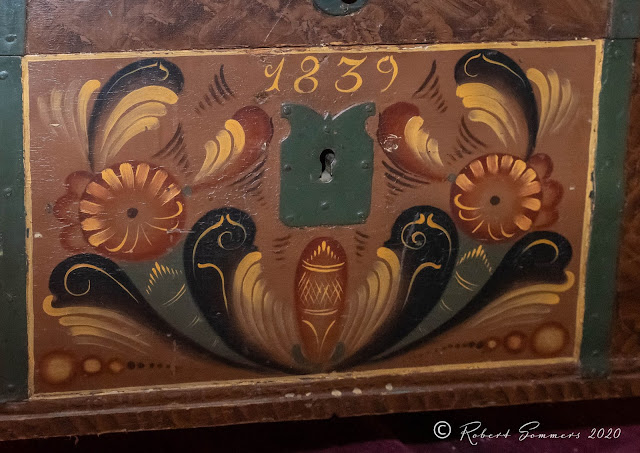 In the top picture it is sitting on my Gustav Stickley desk, which seemed like the best place to allow people to see the lovely paint. 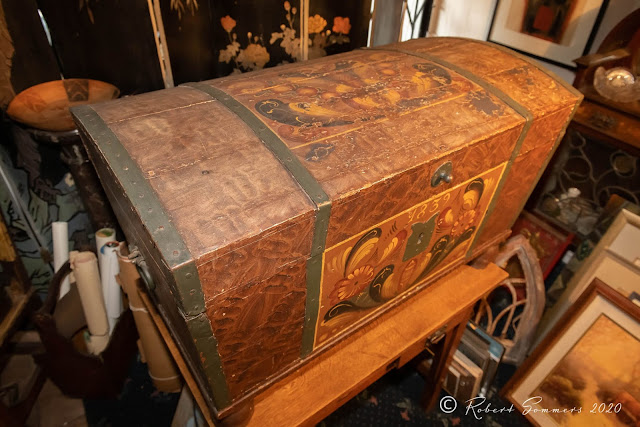 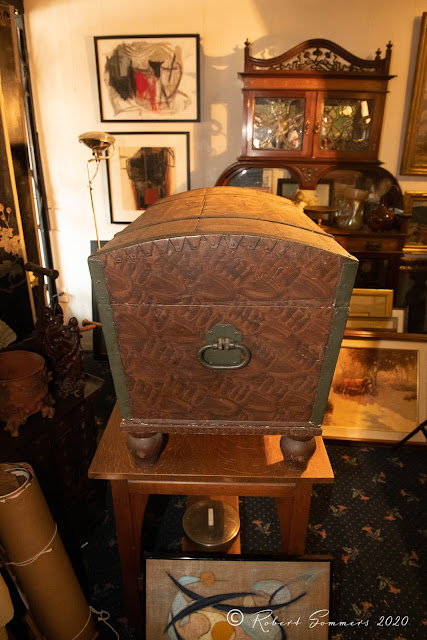 I admired the old paint, the care the owner took in embellishing it, the heavy hand wrought lock and pulls.

He offered no hints as to its country of origin and actually I was pretty sure that I already knew.

This beauty was not made in a disposable age.

Yes there is some paint missing but how good will you look at the age of one hundred and eighty one?

*
I know a lot about a lot of things but I am the first to admit that I don't know everything, not by a long shot.

And I have to confess, I was wrong about this trunk. I suspect that will give a few of you some pleasure and glee.

When I saw the paint on the front panel initially I actually  thought that I was looking at a Spanish Colonial box from Mexico. Hot damn! 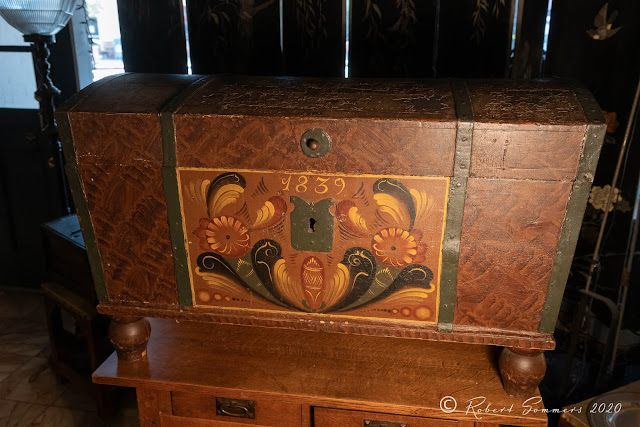 Something about the florid paint strokes threw me for a loop. It reminded me of paint from Olinala. I sent a picture to Spanish Colonial expert Jim Jeter. It turns out that I could not have been farther off.

Jim is another person I have enormous respect for. He felt that it was definitely European and he leaned towards German or Swiss. Tyrolean he said.

I have done some further research and think it is actually Swedish or Norwegian, maybe even Pennsylvania Dutch.

I have seen this sort of iconography and decoration on Scandinavian and German pieces from Ohio and Pennsylvania. It won't have nearly the value of a Mexican trunk but it is what it is. I was way off. It happens. 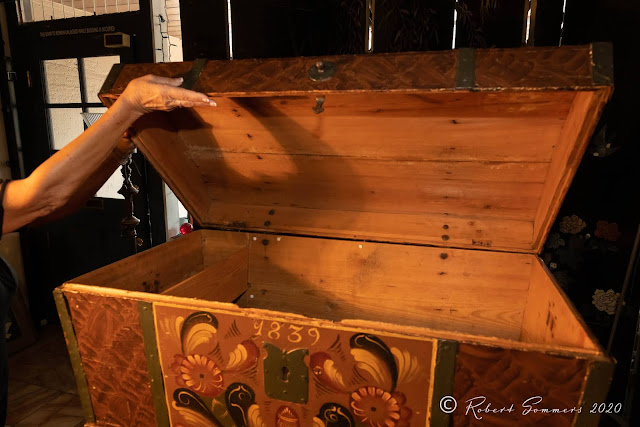 In any case, it has a lot going for it, whatever its exact geographic origin is. I love the faux and understated background paint, the poor immigrant mimicking the look of fabric perfectly.

There are a lot of similar old trunks out there, this is how our forebears made the long trip across the pond with all their possessions, before the advent of samsonite.

And it is so solidly built, how many of your suitcases do you think will make it this close to the two century mark? And were made by hand?

I won't make a fortune off it or what I was hoping to get from a Spanish Colonial trunk but it is pretty in its own right. Yours for $650.
Posted by Blue Heron at 3:09 PM

Our book club just read a book called "The Emigrants"(Vilhelm Moberg).It's about emigrants coming from Sweden to America in the 1850's. One of the chapters tells about how they packed everything into trunks probably just like the one you found.

I love the chest