Most men I know are into boobs. I'm no different, can't explain it but guys are truly enchanted with what is really standard operating equipment on the distaff side of the equation. 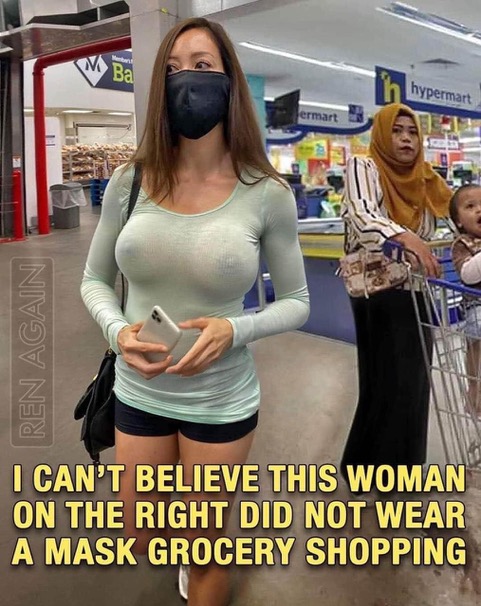 So when I got this text message meme the other day I dutifully passed it around to my more lecherous pals.

Who all pretty much had the normal snarky responses you would expect. Ha ha.

Except it shall be noted, for Wilbur, who says he looked at the woman and child on the right first, as did Bradford, who says he was tired. And I still can't read Shearer's reaction, not sure where he falls on this one but he noted the kid wasn't wearing a mask either.

The most interesting response I got was from Ricardo, who has lived in Thailand for a long time and is married to a Thai woman.

Ewww! Holy Y chromosome, Batman! What do you folks think? Is my keen eyed friend Ricardo right on this one? Are these female hands? And I mean biologically female from birth in the historically ascribed sense. No visible adam's apple although they can certainly be shaved... Is she factory or altered, now running in the modified classes? I bet the women know...
Posted by Blue Heron at 5:21 PM

If there had been no text I am sure I would have fallen into the norm by noticing the breasts first (I like to think I am highly literate)... unless... Ricardo is correct in his tentative assessment and I have some finely tuned 'trans detector' I did not heretofore know about!

The night heron pic is superb, by the by!

Funny, while I didn't necessarily 'consciously' hit on the exact same idea as Ricardo, I was very tempted to reply to your original email with a joke about "my new girlfriend and what he thinks about masks"!

Interesting...I had noticed the hands also, but didn't go any farther with it. Great heron shot !!!

Ricardo makes a good observation. But I can’t tell by the hands, they do appear ample.

Well I was always taught - five foot four and not an an inch more is a fairly safe rule if you don’t want any surprises.....
Can’t tell the height from that picture tho so not so
useful in this context

I don't know about the other readers but, my heron is getting blue! A bird in the hand....

Hands? What hands? Don't know/can't tell if the person is trans, but the boobs are clearly 'bolt-ons'.

I have been saying for years that plastic surgeons have done more for the beautification of CA than any other group!

Picture is from either Malaysia or Indonesia from clues (brand of store, hajib, physical appearance of two women), high probability it is Malaysia as Indonesia is much more conservative. Appearing in public with a sheer top and no bra is a much stronger breach of social norms in those countries than it would be in more liberal countries. Transgender people are already marginalized members of society and have less to lose for being provocative in public. It is also a 24 hour market, so this choice of attire could be a business decision for a night worker. All that is speculation, the only thing for sure is that indeed, those are 'bolt ons'.*

* never heard that phrase used for implants, certainly evocative in this case.

As a female, not sure about her gender, but the boobs are most certainly altered.

Its a woman! and the market is not Thai...from Oa

The breasts looks too perfect...I think that it his person might have been a man prior.