Will Chandler sent me a cool pdf. He amalgamated the five part biography of Julius Wangenheim that was published in 1956 and 1957 by the California Historical Society.  Link to the original here.

It should prove interesting to lovers of San Francisco, San Diego and California history. Julius Wangenheim was a very important and instrumental person in the building of modern San Diego. He recounts interesting anecdotes about his childhood in the Bay Area.


Another article on Klauber Wangenheim here.

Funnily enough, I found myself doing research on Julius's father, Sol Wangenheim (1830-1919) last year after running across it both in my California history studies and my family genealogy research. Who was this early California merchant whose name kept popping up in my studies of early California, from pickles to grain sales?

Sol Wangenheim came to California in 1853 and started a wholesale food business in Virginia City, near the Comstock Mine. Interestingly, Waggenheim was a name his older brother actually rather randomly picked, the real family name was Levi.

In 1864, when production slowed in the Comstock, Wangenheim moved his store to Markleeville in Alpine County with his brother in law Simon Neumann (Newman). 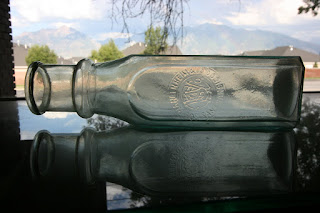 Sol and Simon were incredibly successful, from pickles to grain, salmon, banking and more. Sol had a large cannery in San Francisco with a branch on Chipps Island on the Sacramento River and was also owner of the Pacific Vinegar and Pickle Works.

Perhaps he palled around with my great uncle Sam Sommer, another wealthy San Franciscan who was involved in hair products and banking and lived on California St..

My great grandfather Moshe Sommer was a veterinarian who lived with them as a young man but left shaken soon after the earthquake. His wife was not allowed into the United Sates due to a medical condition so he hightailed it back to Poland.

Will doesn't know this, but I happen to be related to the Klauber and Wangenheim clan.

Denrich Press wrote an autobiography of Sol Wangenheim in 1916. It is expensive. I hope I get to read it one day.