We had a great weekend. A friend of mine gifted me a lovely bonsai tree that had been neglected for a while. My friend Bill Cade is a bonsai expert. I brought it to him and he spent about four hours  trimming it up and taking off dead wood. 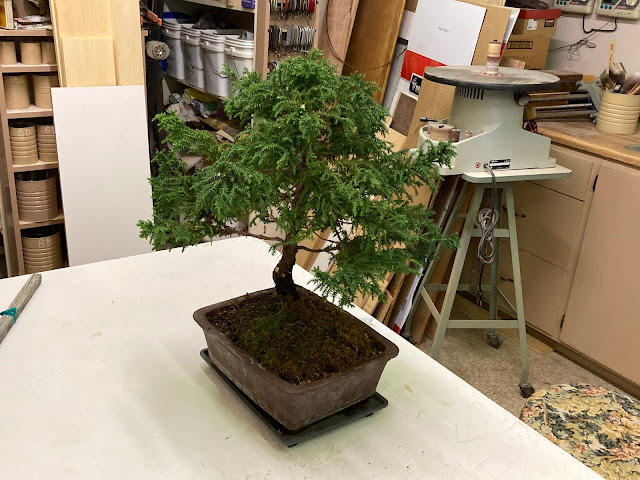 He says that there is about seven to eight more hours of work necessary, which I myself am going to take a crack at.

The bottom branches are coming off at the same height so he says that it will never be classically perfect but I think I can sculpt it into something wonderful with time, experience and patience.

He showed me the shears and pruners he favors and I will probably buy them for myself. Should be a fun project. Bill has been working on some of his specimens for over ten years.

Leslie made her special baby back ribs with the thai chile barbecue sauce yesterday morning, a four hour endeavor. We then went over to our friends in Cardiff, Ron and Lena for a wonderful lox and bagel, pickle and olive brunch. Afterwards we took a nice walk through the Cardiff canyon. Had a great time and showed them Leslie's new car.

We took off in the early afternoon to drive to Corona Del Mar to see R & D. In Newport we saw a Bentley SUV on the street, a first for me. I would be willing to bet it never sees dirt its entire life, it was so stupid. They start at $168,000 and get between 14 and 23 miles to the gallon. This sort of conspicuous consumption embodies everything I dislike about Orange County.

We had another feast that night, after a cheese and caviar plate we had the delicious ribs, corn salad and potato salad. We had picked a whole bunch of fresh valencia oranges from our trees and we had fresh screwdrivers. I don't normally drink but it went down real easy last night and I had a ball. Segued into tequila. So I had my third, fourth, fifth and sixth drink in two years, all in one night. Leslie also brought along a nice French champagne.

Our friend's house is beautiful, after a candlelight dinner on the patio we walked down to the beach for sunset. Lovely. The coastline there is magnificent, truly spectacular.

Finished the evening off with New York cheesecake. Told stories and laughed, so nice to be with old friends we rarely get to see.

Lena sent me pictures of these beautiful and unusual mushrooms that sprang up in her yard in Cardiff. She called them snowflakes, so white and pure. 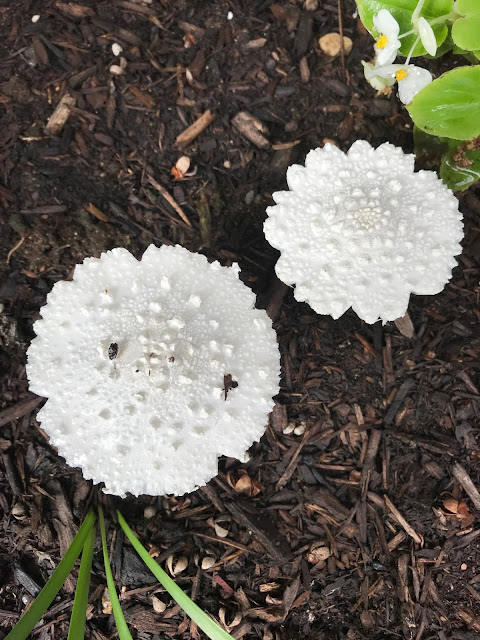 I am not a mycologist but went hunting online and think they might be Bovista californica or a relative of that fungi but I am admittedly out of my depth here. Does anybody know? - Leucocoprinus cretaceous

I had a strange dream last night.

I was with Steve Stoops doing an antique show in Las Vegas but our customers were all rough looking bikers and cowboys.

I couldn't sell anything. Last thing I remember the casino/hotel was trying to settle my bill and I watched as every credit card I owned was successively declined.

Next thing I knew they were kicking my ass out in the middle of a very hot desert. Thankfully I woke up.

We headed back home early today. Nothing too momentous, we drove back through Laguna and Dana Point, stopped at Gelsons for a minute.

Funniest thing was when a woman in a Range Rover tried to cut into Leslie's lane and my wife blurted out "I don't think so, ducklips." I looked over and Leslie was right, the woman had obviously gone a bit overboard on the collagen injections.

The other thing we noticed is that a lot of the luxury cars look like your basic funky sedans if you detach your attention from their upscale branding. She showed me a Jaguar that resembled her Mazda, a Maserati that could have been a Ford and a few other similar cars.

We were talking about Audis and the problems they had as shown on carproblems.com, drive it ten thousand miles and throw ten thousand more dollars at it.  And these cars are everywhere up there because they have a very successful marketing campaign and people have so much money that they can obviously afford to throw at them.

The neighborhood we stayed in in Corona Del Mar was very nice, the gardens and homes were gorgeous and the people all seemed very nice and friendly.

But even if I could afford it, which I can not, I would probably rather be someplace else than Orange County. Too much money, too status conscious and too much compression for me but that is just me.  Been out in the country too long. To each their own. 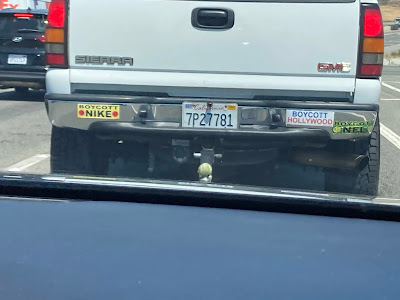 Saw a bunch of stickers on a truck on the way home. When I pointed them out to Les she told me they were Q stickers. Figures.

Got home, removed a volunteer phoenix palm and a variegated agave, trimmed the wisteria which was strangling my lawn furniture and pruned the raphis palm.

Very happy to take a rare Monday off, tomorrow I get to pay bills again. Joy.