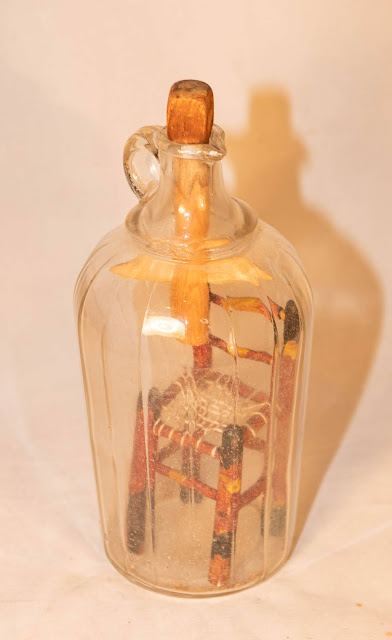 I had heard of ships in bottles but had never been exposed to chairs in bottles until I bought this one from an ace picker the other day.

Not sure of the age but the bottle certainly looks 19th century.

Whole thing is a wonder, down to the cross plugged stopper.

So I started to do a little research and found a whole cottage industry of these charming bottles and chairs, all impossibly constructed inside the bottle itself. 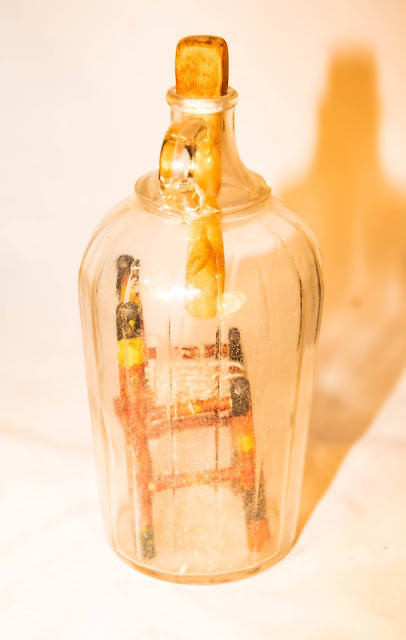 This one is accurate down to its hand caned seat. It is a miniature lodgepole chair, three colored and a little bit Adirondack in origin. Bottle stands 9 & 1/2" tall to the top of the stopper.

An amazing piece of craft work and a real testament to patience.

Some of these old bottles are signed and dated. I have not found any identification in this one.

These bottles are know as puzzle bottles or impossible bottles.

I don't know very much about their history but do know that they go back at least as far as the civil war in this country.

It is said that a dutch ship in a bottle example dates to the beginning of the 19th century. But perhaps they are even older.


Putting items in bottles can be traced by to the mid 18th century. Apart from the letter in a bottle concept, bottles with items inside them from human figures to wooden puzzles have been found. It is thought that the earliest of these examples of the intricately carved ones were made in monasteries by monks who spent tireless hours working on them.

The interior of this bottle shows a little alkaline flecking. Good luck getting that clean, right?
Posted by Blue Heron at 2:26 PM