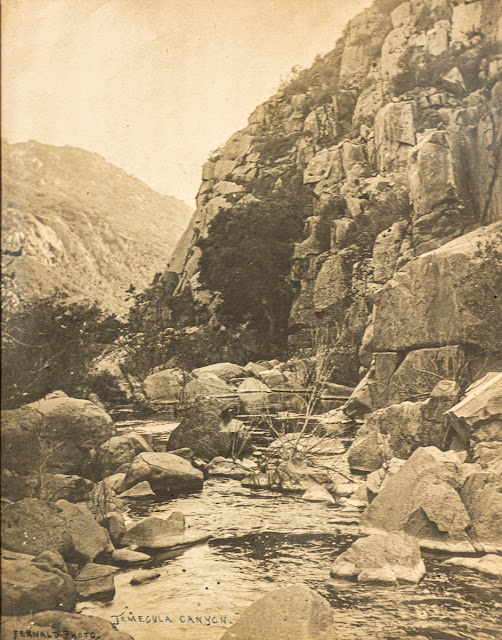 This is a very rare photograph from my collection.

In fact I believe that this 11 x 14" silver gelatin print of the Santa Margarita River is the only known copy in existence.

The Santa Margarita River Valley, the place where I live, was also once known as Temecula Canyon.

As I have written before, the railroad was built through the canyon on three separate occasions, and flooded out and destroyed each time. The last time was in 1915. A piece of the trestle still remains up river.

The local natives told the railroad men that they were not building the tracks high enough but they would not listen to the "dumb indians." It proved to be the downfall of the railroad track.

In fact local lore was that the local Mission Indians would congregate on the top of Gavilan Mtn. to wait out the storms and floods below. Having been stranded in the canyon by the raging river with Leslie for two weeks in 1993, I can appreciate the power of the water.

One can not overstate the importance of this railroad section through the Temecula gorge. This was the principal link between Colton and Oceanside and subsequently San Diego and people were afraid that the sleepy young town of San Diego would be cut off from civilization after the railroad was washed out in the big flood of 1884.


But the winter of 1883-1884 proved to be one of the wettest on record for Southern California. Rainstorms in February brought tremendous downpours, the result of the Krakatoa volcanic explosion half-way around the world, which spewed so much ash into the skies as to alter weather patterns all around the globe. Fallbrook experienced over 20 inches of rainfall, resulting in a total washout of the tracks through the Temecula canyon. The California Southern Railroad suspended rail service to Temecula, and the effect on the company’s finances put them on the brink of bankruptcy. But the Atchison, Topeka, and Santa Fe railroad stepped in, providing enough capital to repair the link between Fallbrook and Temecula. Several hundred laborers, including Chinese, quickly set about repairing the line, which was re-opened less than a year later on January 12, 1885.Rail service continued but the leaders of the Santa Fe Company had lost faith in the viability of an inland route. By 1888, the company completed the “surf line”, connecting Oceanside to what is now Orange County, which provided a desired link to the prosperous trade center of Los Angeles. Santa Fe began moving their offices to San Bernardino, with the view of focusing their operations on the Los Angeles market.Frequent washouts and another disastrous storm in 1891 sealed the fate of the Temecula line. Santa Fe ceased operations to San Diego on January, 1892. Service continued from Temecula to Colton for the next 40 years, with train service ending for good in 1935.

There are several different geographic locations listed as Temecula Canyon but I believe that the term was a broad designation when this photograph was taken in 1904. I believe that this particular spot is several miles north east of me past Morgan Springs. I have not hiked to this spot in over twenty five years. The last time I did I saw golden eagles resting in their eyries in the high rocks on the sides of the steep gorge. And I readily admit that I could be wrong on the exact location, it may be located closer to the SMER property.

This photograph is ink signed Fernald Photo. This is interesting as both Frank Fernald and his wife Catherine were early Temecula photographers. I assume this is Frank's work because it is ascribed to him on the back, or verso as we say in the business. Purportedly, Fernald was the only local photographer in the entire area until he taught his wife how to operate the camera too. 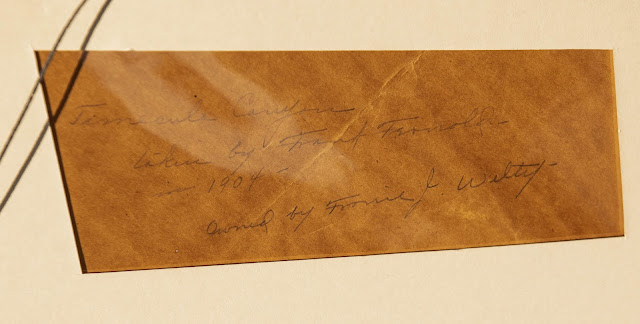 Frank Fernald wore a lot of hats, he had a bicycle shop, was a mechanic, quarryman and photographer. Unfortunately he also found himself wrapped up in a tangled story of local history that involved a shooting. He sold the gun to Horace Magee that shot Louis Escallier and Constable Preston Van Swanguen.

I loaned this photograph to the Temecula Historical Society for a lecture last year. Another interesting thing is that it was once owned by Fronie Jane Welty (1879-1958) the daughter of Richard and Mary Jane Welty, who built the Welty store and the Ramona Inn, where a man might seek "liquid refreshments," play slot machines and cards and shoot a little pool in the otherwise dry county.

They also built the Welty or Temecula Hotel, which still stands downtown and where if memory serves, the boxer Jack Dempsey once stayed, or so the plaque outside once read. It was here that the tragic Magee shooting occurred and there was also a boxing ring installed upstairs. Fighters came to Temecula to train. Jim Jeffries, Jack Sharkey, Jack Dempsey and A.D. Wolgast were among the fighters who worked out there.

I have had it so long that I don't remember when or where I picked this up but I like having one of the oldest shots of the river I live fifty feet from the banks of. Oldest one I've ever seen or heard about anyway. 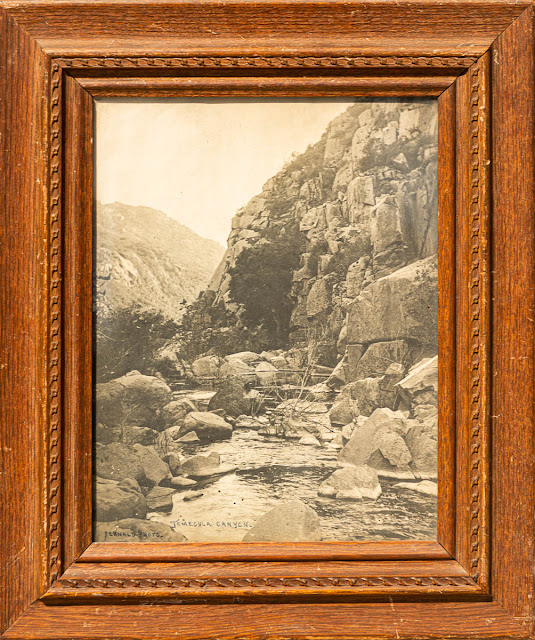 Kind of cool old frame too.

That is very interesting. It might be tough to get to that spot these days. I discovered that the entrance to the headwaters where Marietta creek merges into the Santa Margarita is fenced off now so you can't legally get in there. I don't know it there is fencing to be encountered if one started at your house and hiked toward Temecula. So perhaps images of the Santa Margarita will become more valuable.