On the subject of locks

My buddy and old roommate Jerry sent these pictures over this evening. 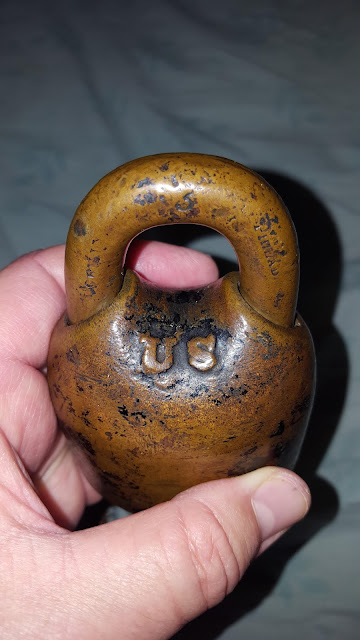 Charles Wilbur Hall, my paternal grandfather, found this lock at the site of Ft. Lincoln, North Dakota after a spring thaw a l-o-o-o-n-g time ago.

Ft. Lincoln was General George Custer's last post command. Custer and his men road from there to the battle of Little Big Horn in 1876. The fort was abandoned in 1891 after the completion of the railroad. (My grandfather was a licensed train engineer from Minnesota.)

There's engraving on the lock that says 1777 AD, I think. So it's possible the lock was there during Custer's assignment, but I have no proof. The number 3. And a word, maybe the manufacturer's name. Of course US is very clear. Would need to magnify the rest.

It's heavy, I'd guess 2 or 3 pounds. The key has always had the sloppy repair that cobbled it back together. You're article made me think of it. It's been put away since.

Jerry, Sr. passed away in 1998. Ft. Lincoln is a state park now. I thought of donating it to the State Park, but I keep hanging on to it.

Well, what a cool lock, Jerry. Obviously forged. I started searching for one like it and had no luck. Looks really old. Nice, great patina. 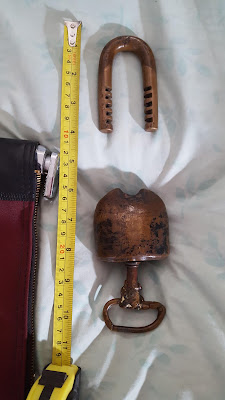 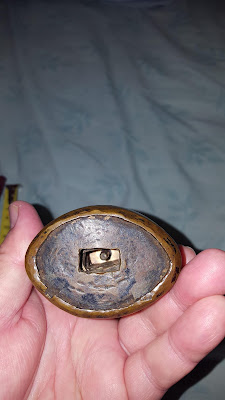 Perhaps some sharp blast detectives will help us do some old fashioned sleuthing and see if we can figure this old lock out.


I saw a couple lock museums in my cursory searches and will send the pics out on Monday, try to get to the bottom of this one.

**************
Postscript - Thanks to reader Kerry we now know that the lock was a U.S. government lock made by the Crilly Lock Company in  Philadelphia, PA #3. Quite valuable actually. It appears that this type of padlock is known as a Scandinavian lock. Still not sure of the production date. I would like to see the entire key, it might be what is called a Polhem or barrel key, probably hand filed.
Posted by Blue Heron at 8:46 PM

Wow,that's wonderful Robert! Excellent investigative work! Lunch or dinner on me next time, and that includes Kerry if he comes into town for a visit from the Bay area. Mahalo, J