Read the mail and current events

Project applicant Nevada Hydro is seeking a permit to operate the Lake Elsinore Advanced Pumped Storage Project ("LEAPS project") from the Federal Energy Regulatory Commission. If built, the project would generate electricity onto the state's electrical grid, but it would require installing 32 miles of 500 kV transmission lines and towers through the Cleveland National Forest, just west of Lake Elsinore, Wildomar, Murrieta and Temecula.

*
Reader Trendbuster sent a nice letter regarding my article on the Temecula Gorge:


hi robert,
nice write up on the railroad, as usual.
some the best pics i’ve seen of the railroad in the canyon are found in a book called “santa fe: steel rails through california” by donald duke and stan kistler. long out of print, but readily available on the used book market.

on the topic of local history, i’ll take a moment to plug a couple more books worth a read:
pioneer notes from the diaries of judge benjamin hayes, 1849-1875
old time cattlemen: and other pioneers of the anza-borrego area by lester reed
hayes immigrated to socal through warner springs and became the circuit judge for our area. reed ran cattle from hemet to borrego.


Robert...loved seeing the gorgeous old photo of Temecula, it really is a dandy. All the history and stories, Jack Dempsey, shootings, etc. all that is so interesting.  I remember growing up there were two books that we had, all about the history of the area, One was Three Paths Along the River and the other was A Thousand Years in Temecula Valley, both by Tom Hudson.  I have them and just happened to look up the last book, it was going for over $900.00.  That has to be an error, right?  And that was a paperback.

I own both those books, the hardback of the latter and a signed first of the former. They are definitely my two local favorites, the thousand years a synopsis of Hudson's chronicles in the High Country newspaper way back when. I also saw the price of $985 on Amazon and wanted to choke. I guess anybody can ask anything, trolling for a sucker...

*
My buddy Jeff has a life in Alaska that I could only dream of. It is called living right. With his planes, work schedule and remote cabin, his commutes often entail hundreds of miles. But the benefits are plain to see as well, like gorging on fresh blueberries at his place in the middle of nowhere. 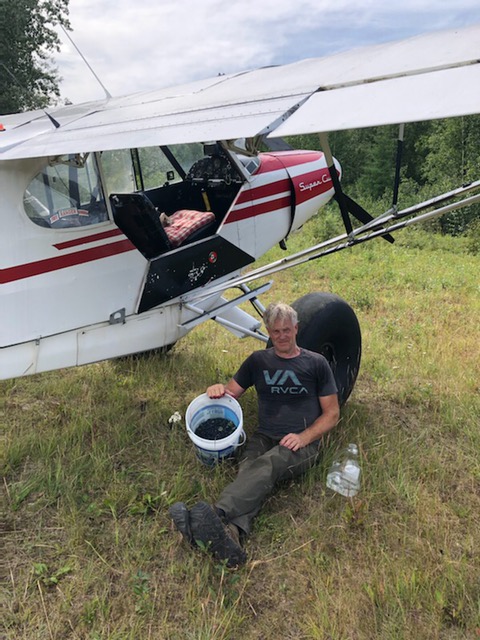 I think he said he ate two lbs. of wild blueberries in about forty five minutes. 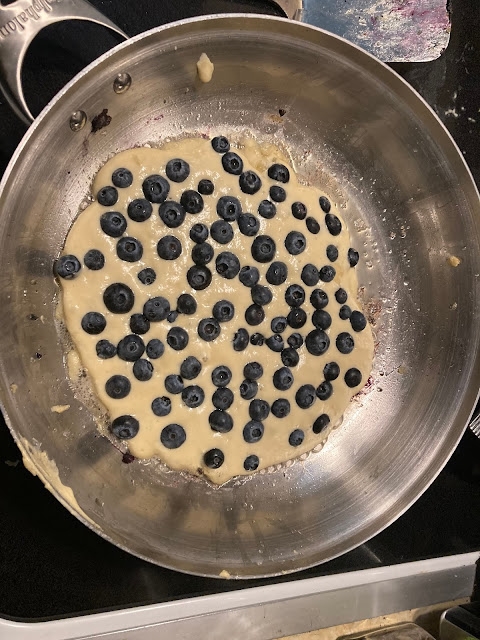 Speaking of which, Leslie whipped up a great bunch of blueberry pancakes a while back that were so delicious.

She made her own "buttermilk" with vinegar. So yummy! Giant old school pancakes.

The Fantasy and the Cyberpunk Futurism of Singapore — WIRED.

*
Shawn sent a nice letter regarding pests and biologic controls:

Yobro,
Sorry to hear about the palm attack. Just want to pass on a little IPM experience.
Probably 20 years ago, I got involved (deeply) in working to try to save thousands (probably 10's of thousands) of Samui's coconut palms. Since I was raising semi-rare seed-grown palms I early on noticed a 'foreign' pest that was attacking all sorts of palms, but primarily the coconuts. Got involved with the UN-FAO and their team that had been working with date palm loss due to borers and leaf-eaters.
The 'solution' came in the form of a Fijian parasitic wasp. Vietnam had been struck badly by the same pest and the trial solution was to import larvae of this tiny wasp which lays its eggs in the body of the healthy hosts' larvae. These hatch inside the larvae and eat them from the inside out. Being the only host known to support the wasp, once the pests die out, so do the wasps.
FAO set up a training program to train scientists at Thailand's Universities, who in turn trained local/provincial scientists, who in turn trained local 'farmers' how to breed the wasps, a portion of which were released and the remainder were meant to be used for more propagation. After training, farmers could go to the local government office and pick up tiny test tubes of "mummies" as the egg-bearing pest bodies were called. These were put into small fishing floats (with 'escape hatches' cut into them) and hung from coconut trees. Upon hatching from the mummies (really, upon eating their way through the host bodies) they fly into the nearest pest-filled tree, mate and immediately search out a host larva into which they lay their eggs.
Well, everything worked really well, except for the "people" who found it easier to just keep returning to the government office to pick up a 'free' test tube of mummies rather than do the breeding portion of the program themselves. The poor local guy doing the breeding for them was working 20+ hours a day and couldn't keep up.
I helped him out for a while, training my crew, building relations with various tree cutting crews and the elephant mahouts who fed their charges with coconut leaves. But after a few weeks I went back to the government and asked if they would have any objection to my commercializing the process. They didn't, and so we started offering a service to local hotels (mostly, but in reality - anyone who would pay!). I took on the SE corner of the island and a couple others took on other portions.
Happy to say, after about 6-8 months we managed to pretty much clear the island! (Think Kauai with its deep valleys and otherwise "untreatable" interior). Think we raised some millions of wasps over the course of a year or so. My crew sat in front of their TV each night, sweeping larvae into tupperware boxes, introducing the wasps and raising the mummies which we then put into the fishnet floats and hung from trees. Of course, as we got close, the community inspiration to continue fell off and the whole thing kind of faded away...and then the next palm pest came along! Oh well!
Anyway, have a look at the IPM options. You might just find a way to protect your beauties! We have had two other major palm pest infestations since (rhinoceros beetle and now a moth larvae) both of which have IMP solutions...if anyone is willing to do the work! I will say, it was quite a profitable business model!
Alohahaha and good luck!


*
Interesting article I found on the I ching. And another by the Spanish author on race and intelligence.

*
Covid 19 now #3 cause of death in United States. Americans are eight times more likely to die from the disease than Europeans. According to the County, 385 confirmed cases in Fallbrook as of this afternoon.

The CNN report you quote at end of the post is hair raising. I am not a statistician like your pun loving Spaniard, but it feels like America is about to launch into a higher level of infection and mortality. The me first attitudes of the ‘urge to merge/Boomer Remover’ generation and the belligerent in your face actions of people who act like they can protect themselves from a virus with flying pieces of lead leave me despairing of America’s future.This makes me worry about you, please stay very isolated, my friend