I voted against recalling Governor Newsom. I think he has done a pretty good job up to date, irrespective of his dining at the French Laundry during the lockdown.

Obviously many people in my state abhor him, primarily for trying to keep a handle on the Covid crisis but I think he he did an admirable job and, in his place, I might have been even more draconian. Sorry, but your freedom doesn't trump the rest of our survival.

Face it, the way the national civil war is going, the right would try to recall him for not brushing his teeth the right way. It's just the sad way it is. Recall cost us three hundred or so million and never had a chance. 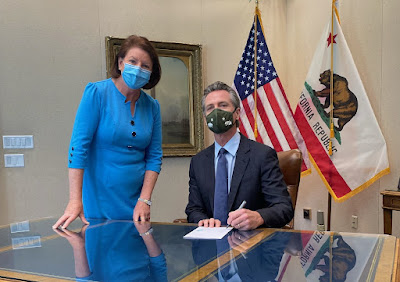 Having said that, he is really pissing me off with the new bills that will take a sledge hammer to zoning and local control of development in my state.

I think that the bills are incredibly irresponsible and the growth that they will result in unsustainable with our limited water and already crowded roads and streets. Like it or not, the state can only support so many people.

There is an obvious ideological split in my state but there is also an urban/rural divide and this one size fits all workaround is destined to bring misery to those of us who have chosen to forsake some of the cultural luxuries of urban life and live unmolested in the country. This is a direct assault on our lives and livelihood.

SACRAMENTO — California single-family neighborhoods could see existing parcels split in half to build new housing under a bill signed Thursday by Gov. Gavin Newsom, a plan more modest than far-reaching housing efforts in recent years but sharply criticized by officials in some cities as an overreach on decisions that should be left to local communities.

Newsom also signed a bill allowing more housing density in areas near public transit. Both bills will take effect Jan. 1 but neither is likely to produce the supply of new housing that experts have said California needs to erase years of pent-up demand.

“The housing affordability crisis is undermining the California dream for families across the state, and threatens our long-term growth and prosperity,” Newsom said in announcing his approval. “Making a meaningful impact on this crisis will take bold investments, strong collaboration ... and political courage from our leaders and communities to do the right thing and build housing for all.”

The most controversial of the new laws, Senate Bill 9, will allow up to four new housing units on a single property in certain neighborhoods that are currently zoned for standalone houses only. The law places limits on new construction in neighborhoods designated as historic. Tenants in existing homes would also have legal protections from being displaced. For lots that are split into two parcels, a homeowner must agree to live on the premises.

As a rural resident, I know that we don't have enough water and we don't have roads built for a potential fourfold increase in housing units. Colorado River water is already being rationed. Our state can only sustain so many people, much of it is a desert. The rural beauty and sanctity of our state will be destroyed forever if this plan comes to fruition.

Newsom on Thursday also signed SB 10, creating a process that lets local governments streamline new multi-family housing projects of up to 10 units built near transit or in urban areas. That new legislation also simplifies zoning requirements under the California Environmental Quality Act, which developers complain can bog down projects for years.

“SB 10 provides one important approach: making it dramatically easier and faster for cities to zone for more housing,” the bill’s author, Sen. Scott Wiener, D-San Francisco, wrote in a news release. “It shouldn’t take five or 10 years for cities to re-zone, and SB 10 gives cities a powerful new tool to get the job done quickly.”

Newsom also signed SB 8, which extends the Housing Crisis Act of 2019. The act, which speeds up the approval process for housing projects, curtails local governments’ ability to reduce the number of units allowed on a site and limits housing application fee hikes, was set to expire in 2025. Now it will go through 2030.

Low cost housing has always been a pipe dream here. I know, I was a builder. Units get built and soon their values escalate so high that only the wealthy can afford them. We can not build our way out of the homeless problem either.

Builders and labor unions are loving the bills of course because it gives them a chance to steamroll local opposition to high impact projects with a single swoop.

Slow-growth group Livable California, which has pushed back against SB 9, called it a “radical density experiment” and worried developers would use it to remake neighborhoods without community input.

This is bad. The next project that gets pipelined in without due process and environmental controls might be right next to your place. The character of our state is under siege. It is a sad but true fact, and I speak as a California native, that not everyone can afford to live here. But if these sorts of bills pass, perhaps they will destroy so much of what we hold dear that few will even want to live here.

I sort of wish he had signed these bills before I had sent my ballot in.

Never saw you weighing on zoning. Unfortunately I agree with you. The problem is that the State rules supersede the localzoning.

The principals are worth pursuing but not like this.’

There is great debate here in SM between the affordable housing people and the slow growth. This hits that issue big time.

score one for the pillagers...

1) Totally sprung or Eating the Kool Aid - This blog segment is you at your finest. Just love it.
The only thing I would add is - the newly awakened (supposedly now not repressed) like to say “This is my truth” - I like to say “Your truth isn’t necessarily my truth” 😂😂😂😂
And… there is ALWAYS room in the freezer for one of those little TJ’s NY cheesecakes. Naughty Leslie 😂😂

2) Great piece on the zoning destruction.

This disasterous decision is consistent with the belief that big govt knows better and should control everything instead of supporting local control.

Once again, the question about splitting up the state arises. Urban/rural; coastal/inland; Central Valley/Hollywood. It would give this area more representation for sure, something we also need to solve some of these problems. I agree Newsom was fabulous on Covid. The housing problem won't be solved this easily as you say.

Clearly the answer is to build more dams for our water supply and micro nuclear powers plants everywhere to provide the juice for all the new homes and electric cars.