Good article from E.J.Dionne today in the WaPo. He gets a little dramatic at the end of his shpiel but makes some good points here nonetheless that I print. Funny that GOP spends like bloody pirates on their watch (the national debt rose $7.8 trillion dollars during Trump's term) and then suddenly get concerned about debt when the other guy is in charge. 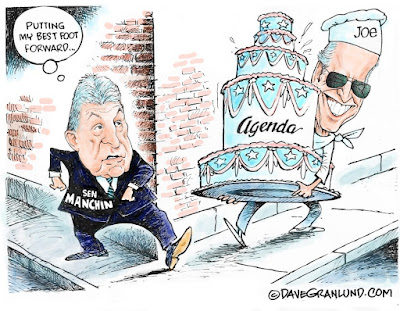 I don't blame Manchin and Sinema for being thrifty and playing to their base but I think they are being used by the right and could easily find themselves alone in the middle of the highway without a friend to their name one day.

...the much-discussed $3.5 trillion price tag is a lot of money. But that number is based on 10 years of spending. Sharon Parrott, president of the Center on Budget and Policy Priorities, points out that the $3.5 trillion should be placed in the context of an anticipated gross domestic product of $288 trillion over the same period — meaning that this debate is over roughly 1.2 percent of the economy. That’s hardly a gargantuan investment in social equity and economic stability for tens of millions of our fellow citizens.

Moreover, as both Parrott and my Post colleague Catherine Rampell have noted, backers of these programs are not proposing to throw the whole thing onto the national debt. On the contrary, as Rampell reminded us recently, lawmakers voted last month for a maximum deficit increase of about $1.75 trillion, with all or most of the package to be paid for with new revenue and budget savings elsewhere.

Manchin said today he would support raising the corporate tax rate from 21% to 25%... that will go long ways toward covering the
$3.5T... he was critical of the 2017 tax bill that took the corporate rate from 35% to 21%... he characterized it as a gift for the wealthy.