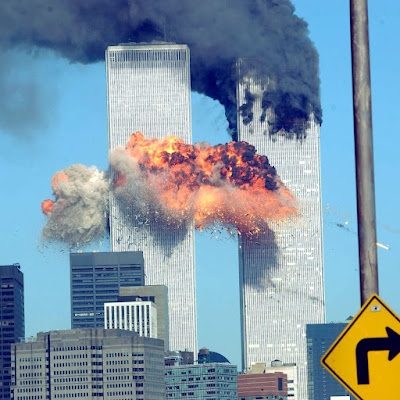 Tomorrow is of course the anniversary of 9-11.  This is cuing some very strange opinions in the local newspaper of late.

Yesterday a Muslim educator in the San Diego Union Tribune wrote that we had to denude the anniversary of the tragic event from any talk of Islam and suggested that we instead talk about Timothy McVeigh and right wing extremism in its stead.

There was a similar article today, don't forget the Muslim janitor killed in the attack and the fact that some of the first responders were Muslim.

Muslims feel quite alienated when the subject of 9-11 comes up. And of course one of their go to cards is to blame Israel and the "Jewish run media" for persecuting Muslims the world over.

Neither Timothy McVeigh or Dylan Roof had anything to do with 9-11. As heinous as their deeds were, they didn't fly planes into the World Trade Center or the Pentagon. Neither did Israel or the Jews. The Baptists and Lutherans didn't either. Muslim zealots did.

Jihad is a very strange and unique view for any religion to believe, to actively kill nonbelievers for your deity. It is bred into the very core of Islamic culture. Not every Muslim is wired this way but enough are to present a real and constant worry for our world. The titular head of the Taliban, Haibatullah Akhundzada, actively groomed his son to be a suicide bomber, he succeeded in 2017 and went to the land of the seventy two virgins, the act of Tawba.

The person who participates in (Holy battles) in Allah's cause . . . and nothing compels him to do so except belief in Allah and His Apostles, will be recompensed by Allah either with a reward, or booty (if he survives) or will be admitted to Paradise (if he is killed in the battle as a martyr). Had I not found it difficult for my followers, then I would not remain behind any sariya going for Jihad . . . and I would have loved to be martyred in Allah's cause and then made alive, and then martyred and then made alive, and then again martyred in His cause.

I don't think it is helpful to pretend that 9-11 was a one off and not motivated by a particular religion or ideology. It was. Who else does things like this? No grievance, justifiable or not, should result in actions that have dire consequences with so little regard for innocent lives.

We desecrate the memory of those killed in 9-11 and the earlier 1993 World Trade Center bombing by Omar Abdel Rachman when we pretend that they were not caused by this death cult. This is not to mention Maalot, the Lebanese barrack bombings, Paris, Luxor, Argentina, Nairobi, Boston, Mumbai and Madrid and unfortunately too many other places to count.

The same hatred motivates the Taliban that are currently whipping women and killing and beating journalists. It is clearly related to one particular creed and culture. We forget that at our own peril.