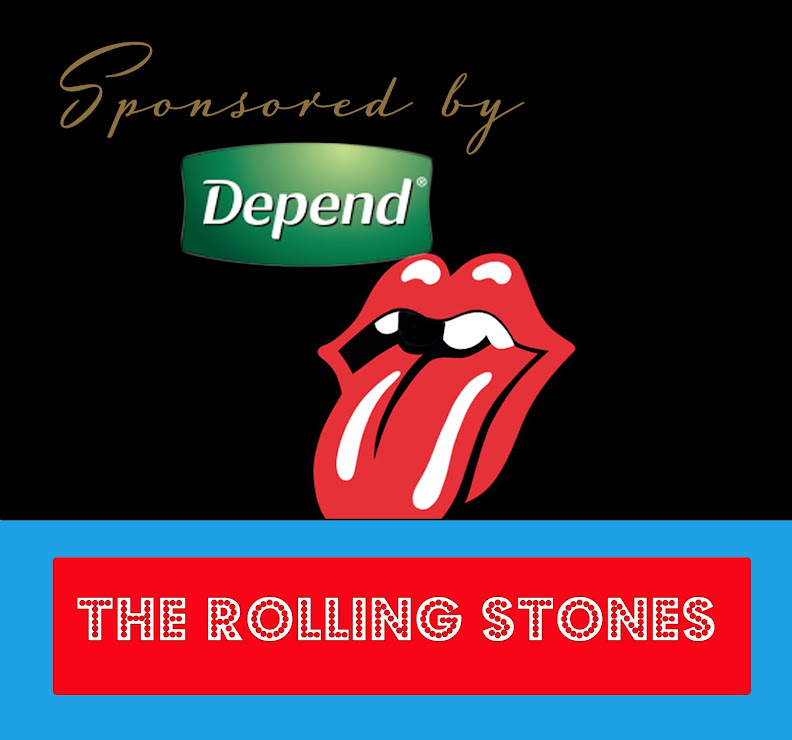 This will have to be quick. I have work to do.
When Rolling Stones drummer Charlie Watts recently passed into backbeat heaven, I thought, what a great time for the band to call it a day.
A perfect punctuation mark or rim shot to a storied career. Spare us another ten years of watching a once great band wither away and die right before our eyes, 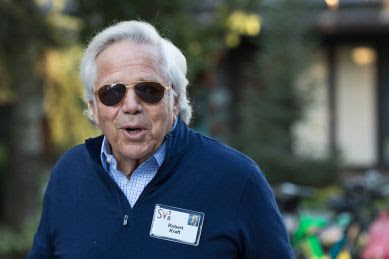 But no, apparently the $how must go on.
They played a private concert for billionaire Robert Kraft and a bunch of his corporate pals at Gillette Stadium in Boston. Not sure what they made but you can be sure it was plenty.
They sure missed Charlie but it took no time at all to fill the seat, did it? 😢
Guests included the head of Moderna, Noubar Afeyan, Massachusetts Gov. Charlie Baker, Draft Kings CEO Jason Robins, and Providence Equity founder Jonathan Nelson. Kind of doubt anybody was smoking fatties in this crowd. 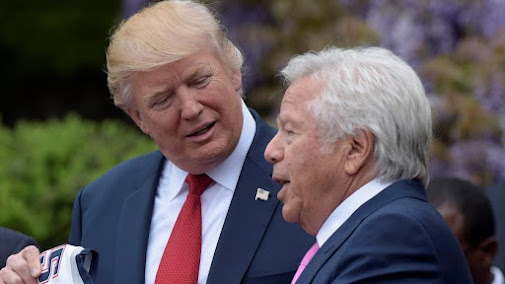 You remember Kraft, don't you? He is the Trump good buddy and crony who got caught with his pants down in Florida. He apologized and had the charges dismissed, the call girls got big fines and community service. Pays to have a good lawyer.

The Monday event turned into an emotional evening for the band as a group of just 275 guests dined on sushi and sipped cocktails inside an enclosed tent on the Patriots’ home football field at Gillette Stadium in Boston, sources said.Billionaire Kraft, who “loves to throw parties,” looked ready to celebrate during the first major party he has has hosted since the outbreak. His girlfriend Dr. Dana Blumberg was seen by his side throughout the night.

...Previously Kraft has brought in Elton John and Paul McCartney to perform at other events. But his favorite group seems to be the Stones — they performed at another one of Kraft’s events in 2016. Monday’s set list included “Gimme Shelter,” “Start Me Up,” “Miss You,” and “Let’s Spend the Night Together.”

Now I am not going to get into the legality of prostitution or comment on the actual "poignancy" of the private concert that the Patriots owners and his rich buds attended.
It does sound very emotional, I am hoping that the sushi and cocktails did something to blunt the sting. Cry all the way to the bank.
The idea of rock and rollers selling themselves out for the patrician set makes me slightly queasy. Just rattle your jewelry, as John Lennon once so famously said.

McCartney played a private wedding in Rancho Santa Fe a few years ago, one that didn't last much longer than the reception, if I remember correctly.

I can't see Lennon playing this sort of thing nor Jerry either for that matter. Dylan, possibly.

Because they all stood for something else besides money. The Stones? Don't think so. How long have they been cashing in and what exactly is the message? Besides the naughty bad boys schtick and the band that won't waste a minute when another one drops. 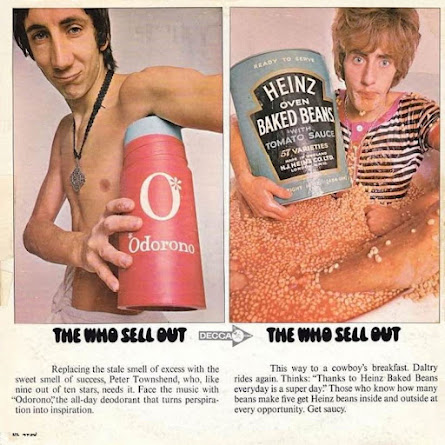 Of course, authentic hippie ethos is in very short supply when a big payday is at hand.
The Who, Dylan, Aerosmith, they all sold cars and other merchandise.
Donovan flogged Volvos.

Sounds like I need to grow up, right? Nobody stands for anything any more and if they once did, they forgot what it was.

So now you get these quick little cash cow events and the billionaires can party and the almost equally rich musicians can get stock tips and everybody leaves happy.

Now there is nothing wrong with being rich or poor, there are good and bad people in both castes.

I just think I might be a tad more comfortable with the commoners, would certainly have more to talk about, rather than the gout and the ski trip to Gstaad and what Caribbean island you're thinking of buying.

I saw the Stones when they were great, in 1972. They were of course a different band after Brian Jones left, after Mick Taylor left and after Bill Wyman retired. They should have called it quits right then. I saw them again at the end of the 1970's and they were a pitiful shadow of their former selves.

People forget that they were originally Brian Jones band, along with keyboard player Ian Stewart.
Jones was perhaps the most musically talented and lyrical of the entire group. He played a variety of instruments including rhythm guitar, slide, oboe, sax, sitar, organ, kazoo, dulcimer, recorder, mellotron, marimba, harp and harmonica.

But his spirit and contribution was whitewashed and vanquished and the late leader is like he who should not be mentioned.

And apparently the band got in a bit of a snit when Wyman did just that.

A plaque marking the meeting between Mick Jagger and Keith Richards is to be replaced after The Rolling Stones' former bassist Bill Wyman objected.The blue plaque, unveiled at Dartford station in February, says the pair "went on to form The Rolling Stones".

But Wyman complained, saying guitarist Brian Jones created The Rolling Stones and enlisted the other members."I've never upset a Rolling Stone before but we are going to put it right," said councillor Jeremy Kite.

Jagger and Richards both went to Wentworth Primary School but met up again on platform two of Dartford station in Kent on 17 October 1961.They bonded over a love of the blues and formed a musical friendship that still endures.

Wyman, who left the band in 1993, told BBC Radio 5 live the plaque was disgusting."Mick Jagger and Keith Richards didn't create the Rolling Stones - they were part of The Rolling Stones like all of us," he said.

"Brian Jones wanted to form a blues band and he enlisted each member one by one."He gave the name The Rolling Stones, he chose the music and he was the leader."

Guitarist Jones drowned in the swimming pool of his home at Cotchford Farm in Hartfield, East Sussex in 1969 after taking a cocktail of drink and drugs.

Dartford council leader Mr Kite said the plaque was intended to commemorate the meeting of the two Dartford sons, not the formation of The Rolling Stones.But he said it would be taken down and replaced by another with new wording.

"Accuracy in history is really, really important and we want it to be right," he said."We will create a new plaque which makes it clear that this is where Mick met Keith and went on to be part of The Rolling Stones."

Good for Bill, who has no regrets on leaving the band. He was unhappy when the Stones only allowed him to play two songs in their 2012 London reunion.

“The nice thing was that my kids saw me on stage with the Stones,” he said. “They’d asked me the December before, and I had to jam with them for three days. I was under the impression I was going to get really involved, but when it came to it, they only wanted me to do two songs, which was very disappointing.” 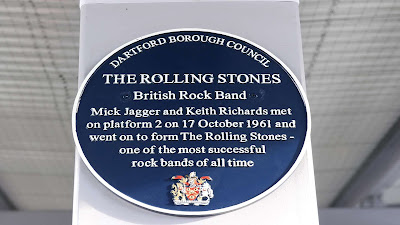 Well, that is it, I have gone on too long. I can hear it now - Grow up, people sell out, get over it. Talk about ancient, that righteous hippy stuff met its due date how many decades ago?
But I would never see them again, not if you paid me.
And watching a concert of a band of decaying fossils prancing around for a bunch of vulture capitalists eating sevruga certainly ain't how I want to get my ya yas out.
Posted by Blue Heron at 10:43 AM

The Stones did a private gig at the Belly Up about 4 +/- years ago …. A rich Rancho SF guy hired them to do the gig for his wife who was recovering from some cancer… it is good to be King!

I remember that. The Stones were SD on tour, and did the private party for $2M.

I briefly met the band members in 1998 and it was striking how smooth and unlined Charlie Watts face was. Keith Richards looked like he had been exhumed and Mick Jagger looked like he had bounced his cheeks down to his jawline. Charlie was dapper, unassuming, and healthy looking. And yes, their 6/13/72 concert in San Diego was much better than their concerts I saw after that.

I totally agree with you