Regardless of my age or lack of property ownership, I was elected for this job just as the rest of the board was. Anna Strahan

I am not overly familiar with the actions and machinations of the Fallbrook Community Planning Group. I know a few of the members have served for an awfully long time and appreciate the dedication and hard work of all the participants. I am sure it takes a tremendous amount of time and commitment to serve on this committee.

Still I have heard some rumblings about some strange goings on of late and will let these screen shots from Facebook save me from a little typing and speak for themselves. If there is another side to the story I would like to hear it. 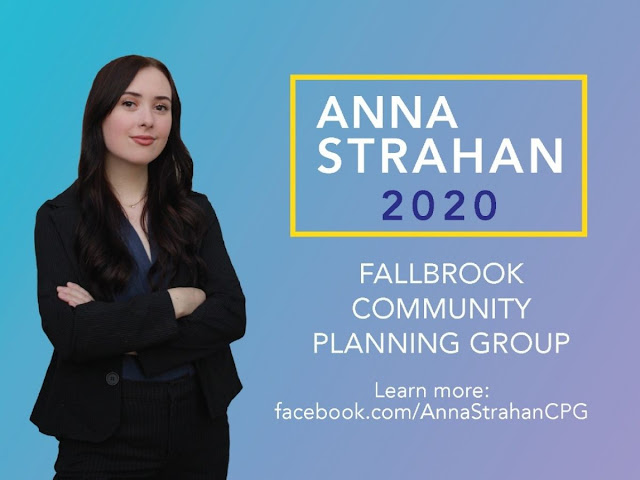 Anna Strahan is the daughter of two of my longtime friends from Fallbrook and is a delightful and hard working young woman with a bright future, hopefully continuing in public service. I do not know Ross Pike. 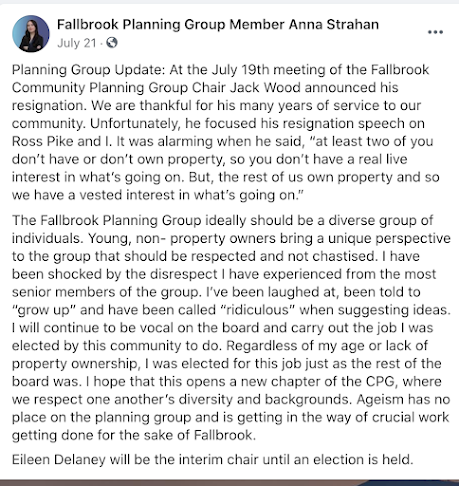 Anna is an independent thinker and I am sure that that rankles the old guard on the planning board. I know, I served on a planning board subcommittee here thirty years ago.
There was a tremendous pressure to go along with the chairman's recommendations and I was finally asked to resign because I often voted against the flow and upset the apple cart.
Having been on the wrong side of a bunch of 11 to 1 decisions I finally did so, seeing how little the board valued independent thinking.
Jim Russell called the shots and I was plainly told that I was not welcome. I took the hint. 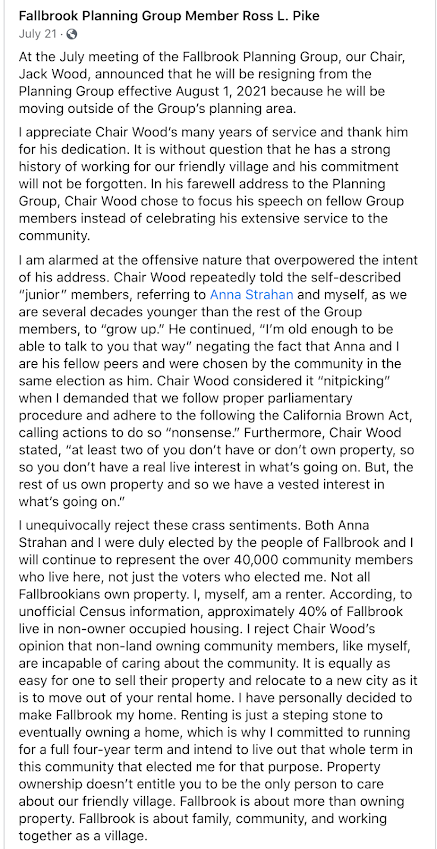 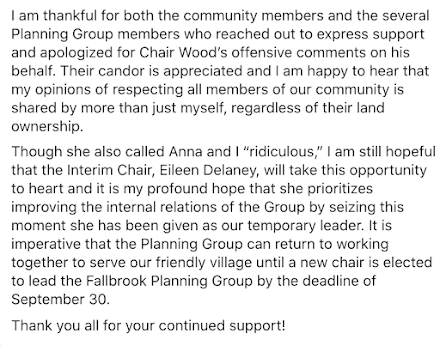 If Anna and Ross are indeed being denigrated for not being property owners or for being young, or having their opinions called ridiculous, as she reports, I think that it is an awful and disrespectful thing.
Such language needs to be curtailed immediately.
When the grand experiment in democracy that we call America started, only white males that owned property were initially allowed to participate in the process.

The U.S. Constitution originally left it to states to determine who is qualified to vote in elections. For decades, state legislatures generally restricted voting to white males who owned property. Some states also employed religious tests to ensure that only Christian men could vote.

Later poll taxes and literacy tests were enacted to keep voting in the hands of the privileged and few. Women finally won the right to vote with the ratification of the 19th amendment to the U.S. Constitution in 1920.

Poll taxes were a particularly egregious form of voter suppression for a century following the Civil War, forcing people to pay money in order to vote. Payment of the tax was a prerequisite for voter registration in many states. The taxes were expressly designed to keep African Americans and low-income white people from voting. Some states even enacted grandfather clauses to allow many higher-income white people to avoid paying the tax. The 24th amendment was approved by Congress in 1962 and ratified by the states two years later. In a 1966 case, the Supreme Court ruled that poll taxes are unconstitutional in any U.S. election.

I am personally glad that the planning group has members that reflect the segment of the population that has to rent in our community. They have a right to be represented as well. Every local citizen should have a voice.
We all live in the same community and some of us are not as fortunate as others but that does not mean that their opinions should not be heard and counted. It looks like some members of the group have apologized to members Pike and Strahan and that is a good thing.
I hope to learn more about this particular kerfuffle and will try to follow the actions of the planning group more closely in the future. It should go without saying that neither sexism or ageism are appropriate on the local planning board.
Posted by Blue Heron at 10:21 AM

I am getting to believe that whenever three or more people try to do something together this kind of kindergarten stuff comes out right away. I think it is the nature of the beast (Homo sapiens). If you love it, then you can get into it and thrive. If you don't love it, you never will and it is best to stay out of it. The architects of the US had this in mind when they created the Rube Goldberg contraption known as the Constitution. It is hard to seize control of the country for long as the checks and balances and sheer awkwardness of US government tend to deter the would be dictator. Local government is more or less similar although the lack of bright light makes it easier to get away with shenanigans at the local level than nationally. So enjoy the food fight, it is the heart of democracy.

Robert, thanks for getting this out. The best governing (or advisory) boards listen to, debate and respect each other’s opinions… but may still agree to disagree. The best board leaders often seek those who have a different experience or prospective. That may be challenging at times, but it ensures all voices are heard, and most importantly respected. I hope Anna and Ross are granted the decorum one would expect from any other board member.

If you listen to all the meetings you will understand what's going on. The new members don't understand the Brown Act and have caused problems within a group that while members have come and gone over the years it has remained nonpartisan and non political. Some of the senior members believe that it is getting better now. Hopefully that's true. We can't afford to push out the people who actually know what they are doing and put in an unbelievable amount of work for free to the community. Of course that may be less impactfull with Newsom signing AB 9 and 10. More proof that votes have consequences

Last I checked, the current Chair has a cease and desist for violating the Brown Act, not the new members.