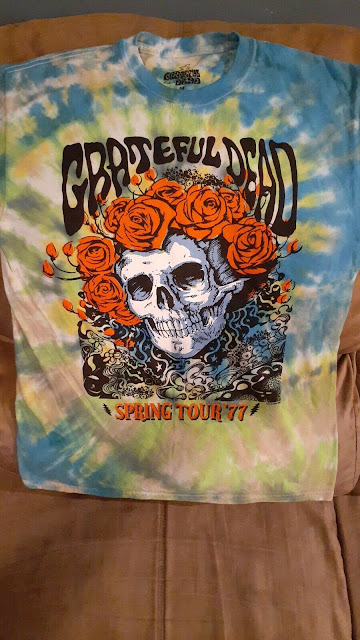 For good or ill, spent or misspent, I spent a lot of my youth traipsing around the country following the Grateful Dead.

Started listening around 1970, going to shows two years later, then really hit my stride when the band hit their stride, the magical year of 1977.

The spring tour was legendary that year and I was there many steps of the way, the greatest show of my life in San Bernardino, then Santa Barbara and three days at Winterland in San Francisco in February and March, then back east to Philly.

Band came back to SoCal in June and I caught them at the Fabulous Forum and tripping back up north for another extended nice Winterland run.

It was the best and most magic time for me and my gang and Jerry surely never played any better than he did that year on his aluminum necked Travis Bean guitar.

The dead were at the height of their powers and in full glory, at least in my opinion. And we Deadheads had so much fun.

So as it sounds, I hold the year 1977 in some reverence, at least in terms of this most psychedelic of bands. It was never that good again, at least for me. And I caught a lot of shows in 78, something was clearly missing...

Now I was at the grocery store this afternoon, looking for string cheese, incidentally, I took a double take when I saw a large and fairly grungy guy in a Spring 77 dead tour t-shirt. I did a quick age calculation, something didn't quite add up. Was he a fellow devotee who had trod my same trail and shared a campaign back in hallowed and headier times?

"Ugh," I thought. "One of those." At least he was honest. This guy might have been one of the johnny come lately preppy deadheads that arrived all boozed up after in the dark got successful in the late eighties and when the band started sounding so dreadful. Made the scene so ghastly.

I thought for a moment. Should I force the impersonator to take off the shirt so I could stomp on it in Aisle Five? Would that be too draconian or a touch too severe? Why would you wear a shirt for a tour you never attended?

To me he was a like a guy playing fake cop or pretend soldier. Maybe I should have tore the sacred rose epaulets right off his lapel but I am a nice guy and not exactly wired that way.  Wasn't really my place. Live and let live, is my motto.

Left him there with a tip of the hat and a smile. Ain't no time to hate, as they say...