The world is off its hinges. Everybody is getting super testy after during the long lockdown. Friendships and relationships are fracturing or being sorely tried, often within families. We have also found out that a big and irrational lie can easily be substituted for truth without making much of a commotion. And everybody seems to be at each other's throats, at the drop of a hat. How the hell do we right our ship?

I had been busy all day and had a two o'clock meeting with some wonderful clients. I had not eaten all day and was famished. I know them well enough that when I got to their house I asked them if they had any cereal or something I could eat? Completely starving. 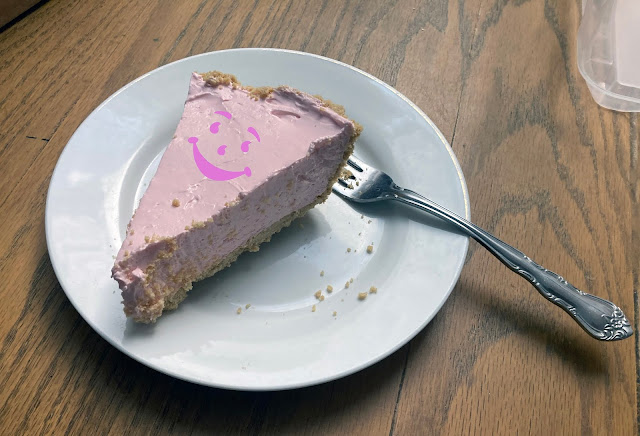 "No cereal but F---- made some Kool Aid pie," J---- said.
Kool Aid pie? That was a new one on me. But I was starving and could not pretend I was Jaques Pepin right then. Strawberry lemonade flavor, pepto color. It would certainly do.
A bit oversweet but not terrible. I would probably do it again if necessary, He says the black cherry is good too and sometimes he does it with a graham cracker crust. His crust was actually damn good. I had eaten food like this with the Pueblo family we would sometimes see and eat with on Feast Day in Santo Domingo. Creative and simple but out of my normal wheelhouse.
Leslie had ixnayed my purchase of a New York cheesecake from Trader Joes the other day, claiming a lack of room in our freezer and I have been moping ever since. Have been dying for a slice of cheesecake for months. I pretended this pie was cheesecake and actually almost convinced myself yesterday. But not quite.
*
Speaking of convincing yourself, BigDave got a call from an old acquaintance of ours who is sort of off his rocker. Convinced himself that through a bunch of chemical explorations of some nasty sort another, he has figured out the secret of the universe. I haven't seen the guy in about thirty years, was always a bit addled.
Anyhow, Dave tried to talk to him about his newfound wisdom and I guess it is a monologue and not a dialogue and he has no time for other people's conclusions or epiphanies. Which is always a bore. Didn't get very far but was apparently very excited to be suddenly enlightened and wanted to share.
The funny thing and the reason I bring it up is that he feels that his latest spiritual awakening may have come courtesy of some online communication with a Chinese bot, which might even be romantic in nature. Might be a human, might be an AI simulacrum but J says it doesn't matter either way, now that he is in possession of the magic hoohaw. He is in a definite relationship, but it might be with an AI algorithm. Love the one you're with, even if its resistors need a reboot, I always say.
Which made me think back to the early days of spam comments, right after we were weaned off DOS. Some of the stuff was twisted but if your mind was elastic enough, you could convince yourself it made a small bit of sense with a little minor effort. Or at least I could. Probably at least as accurate as fortune cookies.
Guess my brain has hardened a bit since then. Hope the Kool Aid pie will help.
Posted by Blue Heron at 2:40 PM