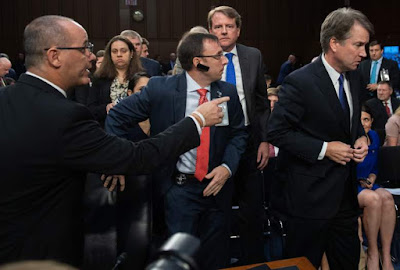 I tried to listen to the Kavanaugh confirmation testimony this morning. The crowd was so rude, they acted like total imbeciles.

The opposition did not serve themselves well with their constantly shouting and interrupting. The man has earned his right to be heard, whatever you might think of his prior record or politics.

The catcallers are not going to win any converts with this type of rude display, whatever message they may or may not have is diminished by their infantile behavior.

*
I am not one of those people real pumped up about a progressive wave in the midterms. I would prefer to see our country move to the center and away from either fringe. The Bernie Sanders, Ocasio Cortez types that are currently getting traction are a direct result of our current President behaving like a crazed third world despot and the antipathy that he rightly engenders.

But the socialists' policies are also frightening, not to mention a little naive.  Firebrands tend to overreach. Programs still have to be paid for. Politics and governance still have to be governed by what is actually possible and no choices are easy.

I guess I would tend to throw my hat in more with the old, establishment types who have fought the long fight and know the lay of the land. But their time may be passing.

Progressives decided to "occupy" Chuck Schumer's office last night because he couldn't get every Democrat in party lockstep. How childish.


Thirteen progressive groups sent Schumer a letter Wednesday morning, telling him anything less than a united caucus vote against Kavanaugh will be “a massive failure of your leadership.”
“Your job as Senate Democratic leader is to lead your caucus in complete opposition to Trump’s attempted Supreme Court takeover and to defend everyone threatened by a Trump Supreme Court,” they wrote. “But unbelievably, nearly two dozen Democrats have still not come out against Kavanaugh, and just last week, you helped Majority Leader Mitch McConnell fast track 15 Trump judicial nominees. That is not the leadership we need.” The signatories include Credo, Democracy for America, Indivisible and UltraViolet, and many of the groups have been critical of the minority leader in the past as well. Schumer’s office declined to comment.
A group of activists also occupied Schumer’s Capitol Hill office Tuesday evening.

Pardon me if I pass on the revolution.
Posted by Blue Heron at 8:44 AM

This whole show is about getting sound bites on the record that can be used in the fall election ads.