A walk on the Avenue. 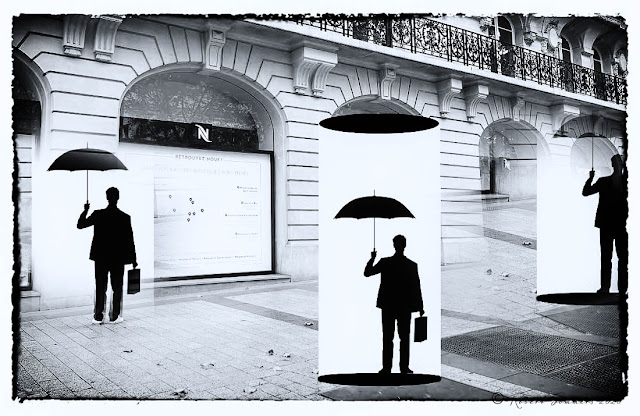 I have seen a few things in my six decades of life that I can not entirely explain. Some of these oddities I would be a fool to confess, even today, for fear of being taken for a mere drunkard or a lunatic, some I trust shall lie with me unspoken until my grave, as they border on the paranormal or occult.

But one thing I saw still keeps me craving for an explanation and I believe that there must be a fairly simple and concrete one somewhere. You see my dear wife Leslie was with me and she saw it too. And I believe that the hallucination that is borne collectively has at least double the usual verité, no?

We were in Paris, strolling one brisk morning on the Champs Elysees. In those days we liked to stay in Arrondissement 14, the Consular district. The right bank offers one a peace that can rarely be found in the loud streets of St. Germaine. We enjoyed the little cheese and patisserie shops we found near our favorite Hotel, the Kepler.

And while it is true we had both quenched our thirst the night before with a delicious bottle or two of cheap St. Emilion from Lussac, I swear we were both of sound mind and temperament on that particular day.

I won't belabor this. We were walking past the closed shops when suddenly a glass tube rose right silently out of the sidewalk, as if by hydraulics or suction. A man in a black coat and a bowler hat and fairly blank expression, carrying a briefcase and an umbrella, stepped out of the tube and onto the quiet street, the fellow quickly vanished into the urban landscape.

No sooner did he make his exit than the tube descended and soundlessly disappeared back into the concrete, leaving nary a trace of its very existence. We both looked at each other in amazement. Did we just see that? Have we entered a private hallucination of Renée Magritte? Our brains cried out for a rational explanation. We looked around for confirmation but we happened to be the only people on the street at that singular moment.

I have asked a few Parisians to explain what we saw, these glass silos capable of popping a bowler capped man on the sidewalk and then silently vanishing, but have truthfully never received a proper explanation of what exactly took place. Forgive me for sounding so ignorant, after all we were merely two young uneducated souls from the rural provinces.

But now with the internet, in my older age, I figure I can now ask such a question without fear of scorn or opprobrium. What exactly were we witnessing that day? Perhaps you have seen it too?

Twice in Paris... walked quite a bit.... no, I did not see what you seemed to have seen!

I don't recall any experience with that sort of clarity. My inexplicable seem to be of the common sort, coincidence, synchronicity, the odd impression or message.

Hey, that dude didn't walk off and write anything on walls in flame did he?

nothing so crude. a glass tube with an automatic glass door.