There are scads of articles out that want to tell you why Trump is going to win the upcoming election. And he very well may. I thought that this article by Todd Blodgett was very good, Here's why Trump is winning, in spite of the polls. Blodgett is an ex Reagan staffer. He says that conservatives can't be honest about their views because many of the rest of us evidently find them pernicious and disturbing.

I especially thought that this paragraph was particularly telling:

In August, the respected CATO Institute reported that 62% of Americans acknowledge holding views that many people consider offensive. Among conservatives, that number skyrockets to 77%. With potentially tens of millions of closeted fans, Trump is a pollster’s nightmare.

Basically 77% of these people have views so repugnant that they are afraid to be honest and candid about them. I am sure that these views include overt racism, sexism, homophobic bigotry and more. Because they are so willing to adopt these same lines of attack on comment and message boards under the cover of anonymity.

I was particularly disgusted by two things today that might make a repugnant conservative cackle with glee. A mixed but largely black crowd in Graham, North Carolina, led by a preacher, was peacefully marching to the polls when the action started. 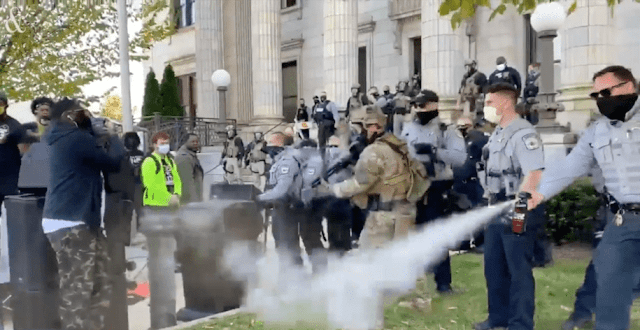 With what bystanders say was less than one minute's warning, the largely all white police force started spraying them with pepper spray, including many young kids and at least one person in a wheelchair. Reporters were manhandled, many were arrested. Leslie and I both had the same thought. Wow, Birmingham, things never change in this country, do they? I guess that is one way to stop the vote. Tear gas them!

I won't even talk about the Trump trolls hijacking the Biden rally in Texas, egged on by the President's son. Many armed, they rammed a car and tried to force the campaign bus off the road. Just a few repugnant conservatives having a little fun! The political event was forced to cancel. Mission accomplished Donnie!

Civil war seems likely these days. Best case is that Biden wins and is able to calm down the crazies. If Trump wins...just more division and authoritarianism coming. Fast and furious.

The polls are encouraging, but I just returned from another cross-country drive and I'll tell you that Trump owns the center of the country. Thousands of miles where there are nothing but Trump signs, and lots of them. Hard to believe that so many Americans have joined the cult, but it's pretty obvious when you drive through NM, TX, OK, MO, IN, etc.

This week will be a turning point in our history. If I were religious, I'd pray.

I'm not religious, and I'm praying anyway. To whom, I don't know: a continual mantra of muttering.