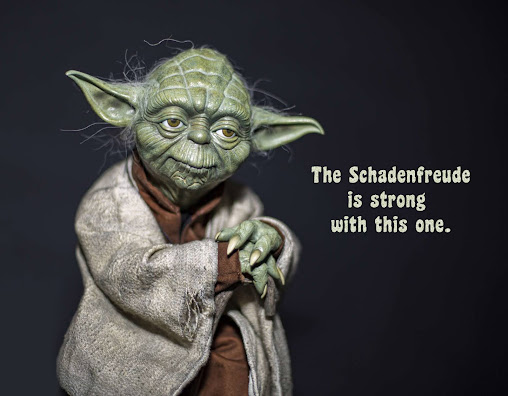 It is tough to wish ill on any other human being.

Unless, they are a real son of a bitch and have it coming, of course.

Or their carelessness and cluelessness puts many others at needless risk.

But please understand I am only talking hypotheticals here.

Still it is tough to be frank in situations like this without looking like an asshole. Even when people have put their head in their own noose through sheer stupidity and ineptitude. 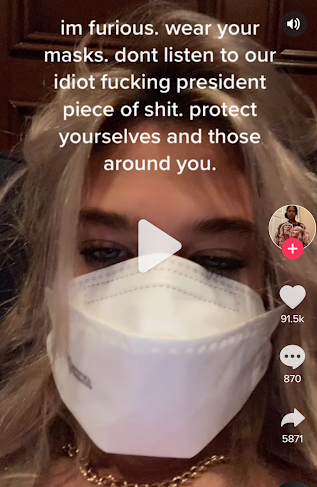 “My mom coughing all around the house after trump tested positive for covid,” she captioned one video, which featured audio of Cardi B saying, “That’s suspicious.” In another video, she describes her own symptoms, writing, “when my lungs hurt and its hard for me to breathe,” though in a livestream shortly following mom Kellyanne’s announcement, she says she hasn’t been tested as of yet, but would be tomorrow and is, unfortunately, “pretty sure” she has it.

'“Update my mom has covid,” Claudia Conway wrote on one post. “im furious. Wear your masks. dont listen to our idiot fucking president piece of shit. protect yourself and those around you,” she posted on another.

Good for you Claudia. No one is going to go after a fifteen year old for speaking the truth so you get a pass. Some serious straight talk about your mother's boss. Sounds like she has her head on straight. Takes after her father. But she could use a little help with her punctuation. 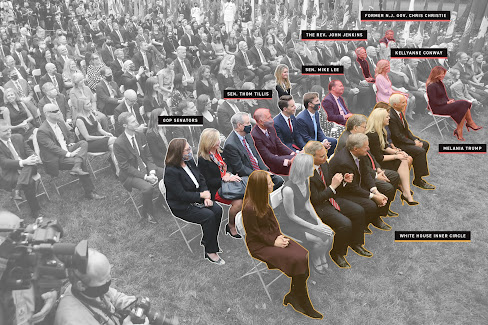 Seriously, the gall of the GOP, now rushing into their victim mode, for not obeying the most basic precautions which are not only designed to help protect them but everybody else. Maskless super spreader events in the Rose Garden and in Minnesota, flouting conventions and rules like the entire Trump family refusing to wear masks at the recent event in Cleveland (taking them off when the event started) or Trump arriving at the last debate too late to get tested as required. Refusing to wear masks, refusing to quarantine. 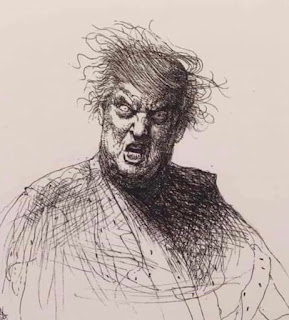 The rules only apply to some I guess. And now the chickens are coming home to roost. Stepian, Tillis, Christie, Johnson, Conway, Lee, Jenkins McDaniel, Hicks, Trump, all infected and surely more to come. All mask nonbelievers.

The people I feel sorry for are the press, who were forced to cover these stooges, Several are now themselves infected.

Of course, the reaction from the right wing press and blogosphere is typical and predictable.

It is either a targeted Chinese plot, because so few dems have gotten sick or it is god's will and was bound to happen eventually anyway. Never take responsibility for anything.

Apparently, they knew he was infected Wednesday morning... he proceeded to Minnesota that day for a rally and a Thursday went to a rally and a meet and greet with donors in NJ.... apparently, fully knowing he was positive and he had to have known he could spread the disease. How manny will get sick / die because of his careless and irresponsible actions?

The President will certainly fare much better with COVID than a diseased lush like yourself would. Go back to cowering behind the wife of China/Moscow Joe Biden where mouthy little punks like you and your violent friends extol the virtues of ANTIFA as they burn people out.

Wow, that anonymous up there is really really angry. I think you've been very decent and in fact pretty mild in your opinions about Mr. Trump and his gang. What I don't get is WHY these Republicans are so angry because they run everything... but they sure are full of hatred of...something, and turn it on the rest of us. Anyway, I'm glad your well and agree with you. Signed, another anonymous who wishes you well.

Thank you. What is funny is that they obviously don't know me because I don't drink and they refer to me as a lush. Leslie thinks it is because of the story I wrote of drinking wine in France years ago, back when I had an occasional nibble. On the same note I was recently referred to as a suicidal man hooked on antidepressants. Have never taken one in my life, nor an upper or downer, or speed or heroin. Anonymous people and assholes can spew whatever they want I guess and see if it sticks.

Maybe you've become important enough to have your own Russian bot or something. Exciting to think about.

If only my dear mother was alive. She would be so proud.

Hey, violent friend checking in. Must have riled up the Anonymous Asshole when I typed 'president Trump' with a lower case 'p'the other day. Apparently AA is a ruff tuff creampuff, easily triggered. Must suck to be so sensitive and reactive.