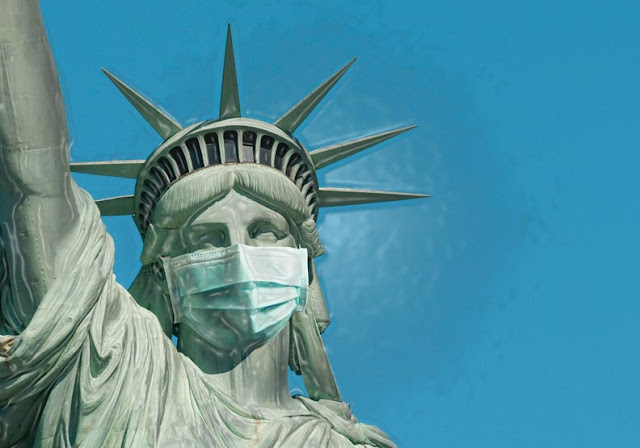 I believe that one of the worst results of the Trump era is how we have managed to weaponize stupidity in our country in such an incredible and effective way. I honestly never thought it possible, first Democrats are drinking the blood of babies in pizza parlors and the Q nonsense, then you have the people that are sure that Biden is going to take all your guns away and institute totalitarian Marxism to America if elected.

I guess that if you have willing traditional and social media allies, it is not such a difficult job to convince anyone of anything, no matter how outlandish. That is especially true if the standard bearer of the message has a lot of power and a penchant for dishonesty, like a President of the United States for instance. Works hard at sowing discord and sounding dog whistles.

It usually takes me a while to find the worst example of this condition in the morning but today this jumped right out at me. It was so easy. Check out this article: Parts Of Idaho Repeal Mask Mandates Even Though Hospitals Full Of COVID-19 Patients.

BOISE, Idaho (AP) — Moments after hearing an Idaho hospital was overwhelmed by COVID-19 patients and looking at sending people as far away as Seattle for care, members of a regional health department board voted Thursday to repeal a local mask mandate.

“Most of our medical surgical beds at Kootenai Health are full,” Panhandle Health District epidemiologist Jeff Lee told board members in the state’s third most populated county.

The hospital in Coeur d’Alene reached 99% capacity a day earlier, even after doubling up patients in rooms and buying more hospital beds. Idaho is one of several states where a surge of COVID-19 infections is overwhelming hospitals, likely in part because cooler weather is sending people indoors, U.S. health officials said.

But the board voted 4-3 to end the mask mandate. Board members overseeing the operations of Idaho’s public health districts are appointed by county commissioners and not required to have any medical experience.

Board member Walt Kirby said he was giving up on the idea of controlling the spread of coronavirus.

“I personally do not care whether anybody wears a mask or not. If they want to be dumb enough to walk around and expose themselves and others, that’s fine with me,” Kirby said. “Nobody’s wearing the damned mask anyway. ... I’m sitting back and watching them catch it and die. Hopefully I’ll live through it.”

“Something’s making these people sick, and I’m pretty sure that it’s not coronavirus, so the question that you should be asking is, ‘What’s making them sick?’” he told the medical professionals who testified.

Amazing really. A state once better known for fly fishing and white supremacy has now gone full flat earth and is now actively going against their own medical professionals, people who are working feverishly to keep them alive. 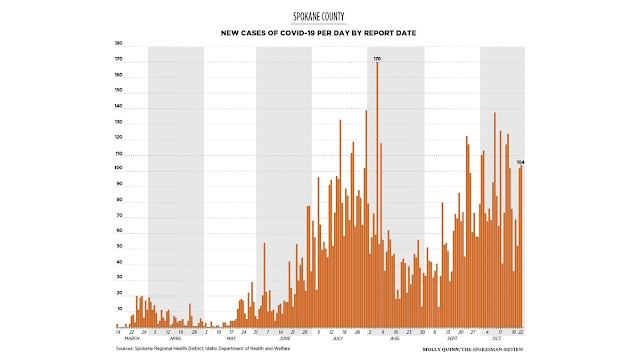 Is there something in the water up there? Or has the notoriously conservative state merely been taking cues from Trump and pretending that masks are unnecessary and that the problem is about to "poof," disappear?

I looked Allen Banks up. The guy is a PHD chemist and no dummy. But he has sure swallowed the kool-aid on this one.

Walt Kirby is just a total idiot. Fine with him if people walk around and infect others... By the way, things are not going so well up there on the covid front, you would think that rational people would take reasonable and basic precautions.

Idaho reported 987 new COVID-19 cases Thursday, according to a tally by Johns Hopkins University, bringing the total to more than 56,600 since the pandemic began. Infections are thought to be higher because a lack of testing and other factors. At least 553 people have died of the virus, including seven reported Thursday.

But no, it seems like a significant number of people in America are content to thin the herd and let people die, let the chips fall where they may. Compassionate bunch. Too freedom loving to give a shit about their neighbors or even their own loved ones.

Another Einstein on the board, Glenn Bailey, put it this way:

Health board member Glen Bailey, acknowledging that masks and distancing can help slow transmission of the virus, nevertheless introduced a motion to rescind the mandate. “I agree we have a problem with this virus, but at the same time I object to the mandate the board passed because it restricts people’s right of choice and ability to comply or not comply under penalty of law.”

I feel for the innocent people in Idaho who don't deserve to be served by these troglodyte knuckleheads and I feel for their tired and overworked medical community as well.

South Dakota Governor Kristi Noem can't quite stop congratulating herself on the state's Covid response. Hard to figure out why after you read this article; This Republican governor thinks she's nailed her state's Covid-19 response. She hasn't.

Noem's South Dakota is second -- only to North Dakota -- in the number of coronavirus cases per 100,000 people. On Friday, the state reported more than 1,100 new cases, breaking a single-day record set the day before when 973 cases were reported. Cases have increased by 51% over the last two weeks, according to The New York Times. Of the 10 hottest spots for the virus, as tabulated by the Times, six are cities in South Dakota.

If there is an epicenter for the resurgent coronavirus in America, then, South Dakota may well be it. 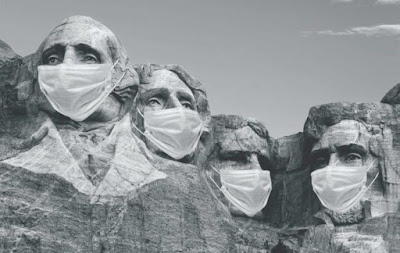 Thought we all had this discussion before regarding drunk driving or smoking around gas pumps. Reasonable to curtail personal freedom if it kills others. Also, a General George S. Patton speech given to draftees comes to mind: "All right you soft ass spoiled civilian sonsabiches. Welcome to the war. All your life you been told about your rights. I am here today to remind you of your responsibilities for the duration of this conflict..."

Shouldn't the "originalist" judges be 100% on board with traditional solutions such as government-imposed quarantines? These go back to Roman times... only a "judicial activist" judge would ignore the original intent of these laws and call mask mandates "unconstitutional."

I guess It's OK If You're A Republican judge.

You are right Repub Anon. I wrote a blogpost that touched on that recently: