Freedom to kill yourself

A Yale professor, John Witt, wrote an interesting opinion worth reading at the New York Times the other day, Republican Judges Are Quietly Upending Public Health Laws. If you can get through the paywall, read it.

All across the country, conservative justices are overturning sensible mask and capacity regulations in the guise of protecting various so called "freedoms," religious or otherwise. Wisconsin is one of the states with a disastrous Covid spike and there are now three lawsuits in the pipeline thereto overturn mask rules promoted by the Democrat Governor Evers. See Wisconsin breaks record for COVID cases for a third time in a week and hospitalizations hit a new high.

A Wisconsin judge has put a temporary hold on an order by Gov. Tony Evers' administration that limits the capacity of bars, restaurants and indoor spaces amid record numbers of coronavirus cases in the state.

The state health department's emergency order capped indoor public gatherings to no more than 25% of the total occupancy limits for the room or building, with exceptions for schools, child care, health care and long-term care facilities.

Of course, it is not just Wisconsin. Similar actions are taking place in Michigan, Texas, California and throughout our nation. All the while Covid 19 is spiking throughout our land, in this feared autumn season. 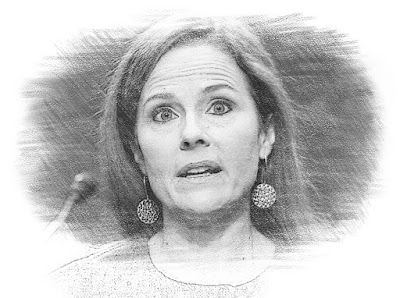 I have no problem with the new Supreme Court justice-to-be's faith. I am squeamish about her father's long time position as a Shell Oil lawyer and her past and current opinions on the reality of climate change.

Her father, Michael E. Coney, worked as a prominent attorney at Shell Oil in New Orleans and Houston for 29 years, from 1978 to 2007, focusing on deep sea exploration and drilling in the Outer Continental Shelf. As part of his work, he represented the oil and gas giant before the federal government, frequently dealing with the Department of Interior on royalties, regulations and compliance issues.

Mr. Coney was also an active member of the powerful oil and gas trade organization, the American Petroleum Institute, twice serving as chairman of its Subcommittee on Exploration and Production Law. On top of being the industry’s main lobby group, A.P.I. has played a critical role in casting doubt on climate science and opposing policies to address climate change.

I would imagine it will be a little bit difficult to go against the industry that put food on your family's table throughout your life. As wonderful a person as she is said to and seems to be. And I fully expect her to be what I most fear, just another punitive company lawyer, unconcerned and dispassionate about the law's effect on real people. She can be great buddies with Gorsuch and the frozen truck driver.

Hypocrisy on the High Court - Textualists and the 10th Amendment.

I think the key comment you made has to do with her lack of concern or empathy for the common person. We will know a lot more about her after the ACA decision. Millions of people will be negatively impacted if the Court overturns the law.

One of the interesting things that could potentially happen is: if Biden is elected and if the Senate is under control of the Dems, as well as the House, they could pass a new, improved ACA... the Senate would probably have to overturn the filibuster rule, however. That is do able!

(1) It isn't nor should it be the role of a supreme court justice to compensate for the failures of the executive and legislative branches, but to judge the constitutionality and correct application of common law and statutory law in lower court decisions.

(2) I think the article should be "Freedom to kill your self others" as non-compliance with public health recommendations of wearing masks, washing hands, and maintaining your distance jeopardizes the lives of others at least as much as your own.

Bonus: I really enjoyed a recent comment I heard regarding White House statements that staff wearing masks is not necessary because everyone is tested daily: This is like saying that you don't need to use birth control because you have a pregnancy test every morning.

Judges judge, that is, they use judgement. There is a wide panoply of disagreement as what statutes actually say and mean. And all too often there is a thumb on the scales so that said judgments follow one's socio-cultural worldview rather than any sort of objective analysis.