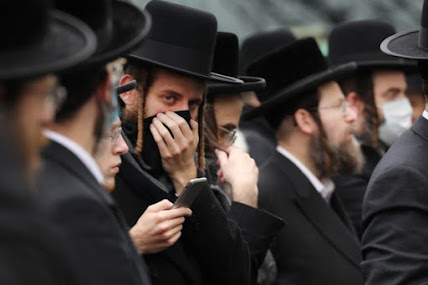 The orthodox jews in Borough Park, New York are crying foul over the mayor's call to limit religious gatherings.

From the New York Times:

Orthodox Jewish and other religious leaders lashed out at Gov. Andrew M. Cuomo on Wednesday over new coronavirus restrictions on schools, businesses and houses of worship as protests broke out in Brooklyn overnight, leading to scenes of chaos and an attack on at least one person.

The frustration was reflected on the street, where video shared widely on social media showed hundreds of ultra-Orthodox men, most of them without masks, gathering after midnight and setting fires and burning masks along 13th Avenue in the Borough Park neighborhood.

In a statement on Wednesday, Agudath Israel of America, an Orthodox umbrella organization, called the order to limit worship to 10 people “appalling to all people of religion and good faith” and “deeply offensive.”

Setting fires, burning masks? Jews? Oy vey! I've said it before and I will say it again, this goes to show that deep down we jews are just as stupid and full of shit as any other creed that believes in the science fiction we call religion. 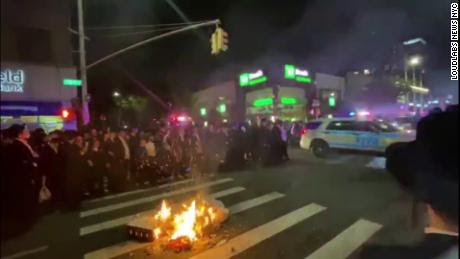 These mumzers beat up a hasidic man and called him a snitch. Honestly I can't stand these people and I never could. Go back to the 18th century you stinky wannabe Amish. Cuomo and de Blasio are trying their best to keep you idiots from getting sick. I guess fundamentalists are fundamentalists, no matter what brand of koolaid you are drinking, even the rabbinically blessed.

At the protests earlier Wednesday, Mr. Yeger spoke against the plan, telling gatherers in Brooklyn that the state was interfering with their right to practice religion.

“We are not going to be deprived of the right that we have in America, like everybody else in America, to observe our religion,” Mr. Yeger said, according to video posted online by Boro Park News, an Orthodox Jewish news organization. “I don’t care who in government thinks that they can stop us. They are wrong. Let them try.”

Mr. Yeger was joined by Heshy Tischler, a local activist who disrupted a city news conference on the coronavirus uptick and has spent recent days decrying the recent rise in cases as a hoax.

Way to sound like goyim, idiots. Nobody is going to interfere with our right to kill ourselves and who cares who we infect? By the way, Covid is blowing up in the Orthodox areas of New York.

The restrictions came amid clusters of Covid-19 cases in parts of Brooklyn, Queens and outlying NYC suburbs of Rockland and Orange counties. The clusters are in areas with large Orthodox Jewish populations, and Cuomo has blamed the outbreaks in part on a lack of mask-wearing in the community.

The clusters of cases have alarmed officials in the city, which just reopened schools for in-person classes last week. Further spread of Covid-19 in these neighborhoods and elsewhere could jeopardize that reopening for the entire city.

Hey Boy George! Wear a mask! It's to keep you safe.

I’m Jewish and I think they are disgusting....gives all of us a bad rap! Selfish

Makes one ashamed to be Jewish. Of course, they don't even consider anyone Jewish unless one is ultra-orthodox. Conservative and Reformed need not apply.

All fundamentalists are more similar, regardless of religion, than they are to the rest of us!

I don't think a conservative or reformed jew can even get officially married or divorced in Israel anymore. More tyranny from the religious right minority.

I'm wondering if Cuomo could have introduced this better. Public explanations of hot covid areas, asking the rabbis what they would choose among reasonable options, etc. I'm no friend to zealotry of whatever kind but avoiding raising the resistance to some of these necessary restrictions seems smart to me.

Sorry I inadvertently forgot to post the link tot he original article. That has been fixed.

The tribe usually displays a bit more sekhel. Whining about being victimized by a government that is actually trying to protect them is reminiscent of the behavior of other creeds in America. So pardon my honesty, I stand by it. I think they are as dingy or dingier than snake handlers speaking in tongues.