My friend Debbie was in the south recently, on vacation. I called her to check in and asked her if she had filled up on grits. "Well, yes, actually, I love grits,"she said. She grew up in the Imperial Valley but her family was from Oklahoma originally and grits were a staple.

I am not a big grits guy, they are made from hominy, but I have my own secret. I love mush.

When I lived in Texas between 1964 and 1968 we were pretty poor. At least for a two year stretch. We had a huge family; Liz, Barbara, Donna, David, Robert, Rusty, Gail, Buzzy, John Matthew, Adelle and Don. That makes eleven. Lot of mouths to feed.

We never went hungry that I can remember but we definitely ate very simply and cheap. Lots of beanie weenie out of a can. Minute steaks. Fish sticks. Endless casseroles. And corn meal mush. Lots of mush. Guess they call it polenta now. We bought it by the big sackful.

Resourceful kids that we were, you found ways to doctor up what you ate if it was an everyday staple. Create a little diversity, relieve the gustatory tedium. Started with butter, then honey but in the end we settled on melting cottage cheese in the mush at just the right time to get a nice cheesy counterpoint.

Now Leslie and I eat polenta on fairly frequent occasion. Polenta is your fancy, five dollar Italian word for corn meal. She melts smoked gouda in it which is similar to what we did but a little stronger and not quite as pleasing to me. 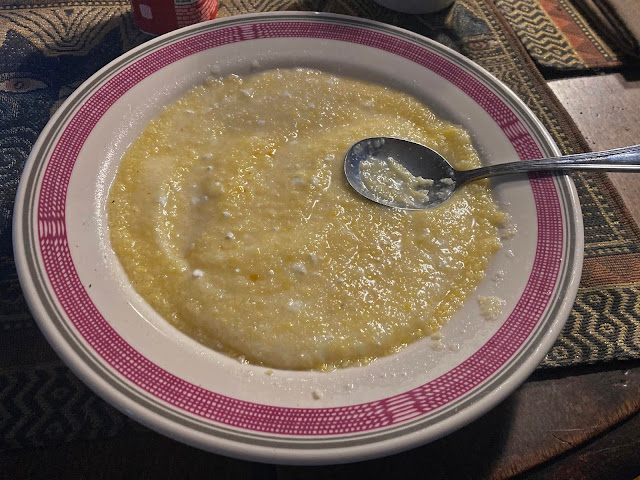 I think rich or poor, one finds some degree of comfort in the food of their youth. I know I do.
Leslie brought home cottage cheese the other day and made me mush this morning. The cottage cheese pooled and melted as I remembered. Dotted the center with a little tupelo honey. it was wonderful, not exactly what I remember, the grit of the corn meal was different and I think we used large curd cottage cheese back then which reacted slightly differently. Maybe I have to put it in the gruel earlier?
Lena says that the best polenta can be purchased from Asanti Brothers in Little Italy. I guess that I will have to check it out. But I would honestly settle for the plain old El Paso, Texas corn meal from my childhood.
It was wonderful. Thank you Leslie! Good to go.
Posted by Blue Heron at 1:10 PM

I grew up in the Valley too. It was one of the last places in the mainland US to be exploited for farming and had almost no original inhabitants. Both poor White and Black people came because there were jobs in agriculture, including Dust Bowl refugees. Foods like grits and biscuits could be found in local cafes into the ‘70s from my personal experience.

I remember the mush days, later in Manhattan and Brooklyn. It is still something I can eat with low-key joy. Thanks for the memories bro.