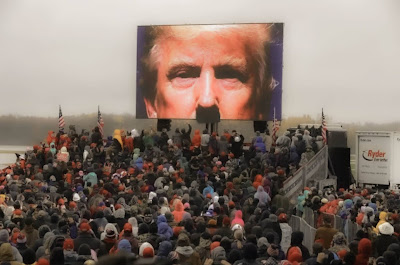 I don't have a tremendous amount of anger towards our President. He is what he is and anyone with a brain could or should have seen it coming.

I think he has done damage to nearly everything he has touched, from his ridiculous covid response, to his horrible environmental policies and for his appointment of Betsy Devos, who has done her best to dismantle the public education system.

The schools we can fix, the damage to our air, water and environment will be harder. And the thousands of people who have died of a disease that he characterized as a hoax and dissuaded mask wearing to combat, obviously they will never come back and their families will never be the same.

Like I said, I can't really blame the grifter in chief. He has been running a con his whole life. Leopards don't change their spots. Guy is $900 million in debt, can you blame him for charging official White House guests three bucks a pop for tap water at Mara Lago?

I blame the people that knew what they were getting, the pussy grabbing guy who stiffed his contractors, ran numerous businesses into the ground and bankruptcy, stiffed the I.R.S. and played footsie with Proud Boys and white supremacists across our land. The G.O.P. saw a useful idiot that would allow them to appoint their judges, enact their social policies and then look the other way at the more distasteful stuff.

After Nuremberg they asked a lot of the German people how Hitler happened? "We didn't know what he was doing," people said. "But the trains ran on time." There were a million excuses, very people could admit that they were on board with his social extermination campaign and ruthless regime. But we know that many of them were and were also active participants.

I hope that Donald Trump loses next week and that we can close this sordid chapter of our history. But of course, it is possible he might win and now he has a Supreme Court that appears to be running cover for him. Then he can pull a Putin and legislate for a couple more terms. And don't be surprised if you hear crickets from the same people who voted him in when he starts pulling his autocratic shenanigans, nary a peep. Ethics don't matter, just getting their man installed, no matter who he truly is and don't think they don't know.

The other day he suggested that it be illegal for the press to talk about Covid during the election. I guess that is how it all starts. What do you want America and how much are you willing to stomach? Hard not to get any on you.

Is this piece of crap the tripe you'll numb yourself with when you pull the lever for your corrupted coward? Spare us, please.