Nora sent this along. 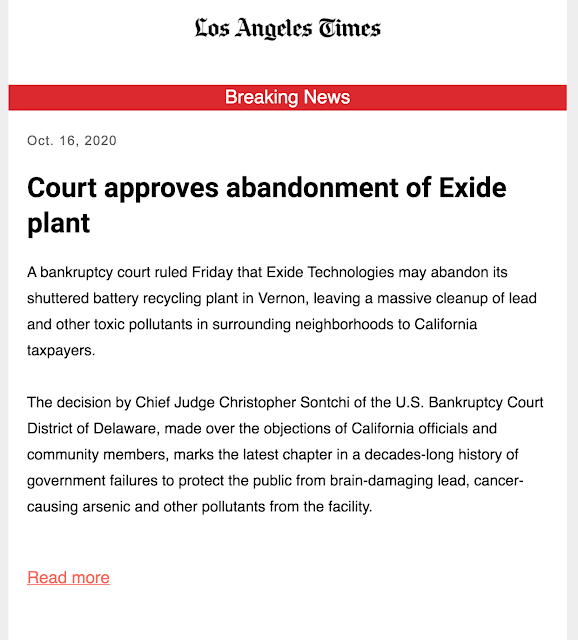 I can't get through the L.A. Times paywall but I think we can all get the message from the screenshot. The capitalist credo, privatize the profits and subsidize the debt and toxic waste cleanup.

According to KTLA the residents are mighty pissed and rightfully so. From the federal government, crickets, of course.

The U.S. Department of Justice and Environmental Protection Agency have agreed not to oppose the company’s plan, which is scheduled to be considered for approval at a bankruptcy court hearing Thursday.

“Accepting this terrible proposal would be letting Exide off the hook for poisoning our families with lead and other heavy metals,” said Mayor Elizabeth Alcantar of Cudahy. “The federal government should not be acting on the side of corporate polluters, and instead should be defending our residents.”

Sorry Elizabeth, not the way it works. We now love polluters who run away from their responsibilities in this country. They underwrite our political campaigns.

Since 2014, the DTSC has ordered testing of some 8,555 homes for lead contamination within a 1.7-mile radius of the shuttered Exide facility. The agency had given itself until June 2021 to clean 3,200 of the worst contaminated homes—those with lead in their soil above 330 parts per million (ppm). But that timeline was set up before the coronavirus pandemic erupted — the residential cleanup was recently suspended completely. What's more, the DTSC currently has no funding and no concrete plan to remediate the 4,753 homes that have a soil lead concentration of between 80 ppm—a state screening threshold—and 330 ppm.

That 80 ppm number is proving contentious. Back in 2017, the DTSC stated how it "maintains a target cleanup goal of properties with lead sampling results that exceed the representative soil lead concentration of 80 ppm." But in a recent email to Capital & Main, an agency spokesperson stressed that 80 ppm is not a "cleanup level," and that the agency has used a federal standard of 400 ppm to prioritize which homes were cleaned first.

The toxic wind from there have us all severe headaches and nausea when I was teaching at Huntington Park High School.