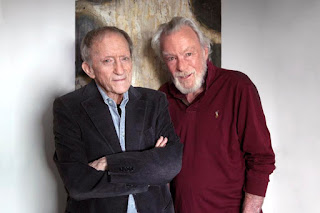 The great photographer Baron Woman has passed away. Baron is on the left here, standing next to our mutual friend John Morris.

Baron was responsible for some of the most iconic photographs of the rock and roll era. His photos in the book Festival with Jim Marshall are the best that were ever taken in my opinion.

I met him when I was very young. My mother was a writer and editor in New York in 1970. She was hired by Rolling Stone to travel on their chartered bus to a concert at a commune in Warwick, Massachusetts and possibly write a story.

She took me along. The commune was called Spirit in Flesh and it incorporated a weird religiosity into the standard hippie ethos of the day. Anyway, Baron traveled with us on the bus up to the Berkshires from Manhattan.

I was blown away when I got there, music, weed, free love, girls that didn't shave, full hippie thing. Some young girl sat me down in the grass in front of a barn, legs spread and tried to get me to stay. I'm thirteen at this point and the place was admittedly enchanting.

Baron was not impressed. He stood up on the bus on the way back to the city and started talking to the rest of us. "This is how fascism is born. Did you see the commune leader's picture in every bedroom?" He started to run down just how full of shit the place actually was and I got a much needed lesson in critical thinking, exotic hippie girls notwithstanding.

Later I met the man in Santa Fe, doing my summer shows. A kind and humble titan of the captured image.