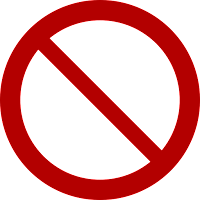 Tom Metzger, perhaps Fallbrook's most famous and notorious citizen, passed away last week. A friend sent me his obit. Tom was an unrepentant racist and the one time leader of the White Aryan Resistance. Moved back to Indiana a few years ago.

I never had any trouble with him, talked to him on several occasions, he was certainly bright and at times even pretty funny. I think he made a lot of money on the racist schtick, would see him leaving the post office with big fat envelopes that I believe were stuffed with cash. Racism was evidently very good business.

Not to say he was harmless, but the violence he preached strayed elsewhere, places like Portland, not his hometown. And he was seen on occasion in the company of hispanics and was even friends at one time with a black guy in town. Not an easy guy to figure out.

Tom fixed televisions and was very strict about who he would work for. A friend of mine named Fred was married to a Hawaiian Filipino woman here in town and Tom refused to work on their set because they were what he considered a mixed race.

Most of us who have lived here for a long time have had to explain to too many people that Tom did not represent the views of even a small minority of Fallbrookians.

I had one incident with him that I thought was rather funny. He was parading in front of my shop one day on Main Avenue wearing a sandwich board with the Mexican flag painted on it with a cross out circle over it (what exactly is the name for that?) I guess it is called a no circle. [Interdit]

Anyhow he was walking up and down the street bitching to anyone who would listen about hispanics in/and overrunning our schools and I said, "Hey Tom. You know I'm Jewish. Do you have any problems with my kids going to school here?"

He thought for a minute and looked at me squarely in the eye.

"No Robert, not as the constitution is currently written."

I started to walk away and he yelled after me in a louder voice.

"But, that's subject to change!"

I couldn't help laughing. I think he did too. 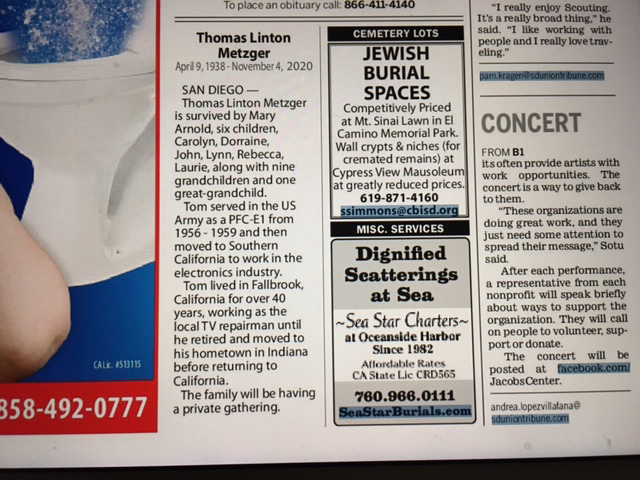 My friend pointed out what is perhaps the final irony and indignity. Look at the ad next to his obit, is that poetic or what?

Obviously the universe has a great sense of humor.

He worked on my tv when I moved to fallbrook in the late 70s. It was a color set, and when I got it back it was black and white.

I grew up a few doors down from Tom and his family. He was our TV repairman. Guess we were approved. He never talked racism to my family, although he did invite my Dad to come to the Maie Ellis auditorium (1960s) for his Town Hall meetings. My Dad went once. Stayed only briefly. Said it was “racist talk.” He never went again but Tom kept fixing our TVs.
In the early 2000s I kicked him and a BBC traveling film crew out of the front office of the Village News. He wanted to show them the “local” paper. They left, grumbling, but didn’t push it.

Pretty interesting about Metzger. Never thought you might be acquainted with him. Remember his name in paper often when I first moved to Ca. in '79 from Ohio. Indiana...not surprised. Ohio/Indiana...2 peas in pod. Farm country.

I think he went back to live at his mother's house in Indiana when things got hot here and they attached his money.

I just saw the tiny little obituary in the S.D. Union. I almost missed it ,it was so small. It's just what he deserved. I wonder if there will be more news later when someone remembers who he was.

Death: the great Leveller. And, yes, the juxtaposition of his obit and the advert shows that either the universe has a sense of Irony - or the newspaper compositor does! Either way, I like it!

Brett told me that his late mother, Avis, was friends with Tom. She told him that she didn't agree with his philosophy but did believe in his right to his opinion. Anyway Brett still laughs at the time that she called him and told him to be sure that the television got fixed quickly so that she could watch Roots.