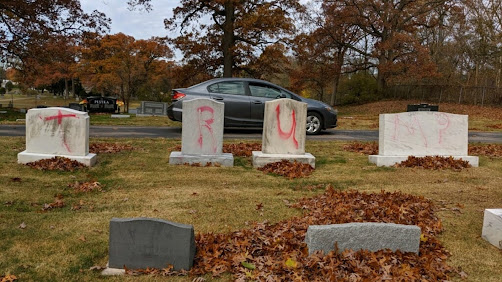 The day of Trump's visit to the city of Grand Rapids, Michigan, the Jewish cemetery there has been vandalized with pro-Trump messages.

Trump and Maga has been painted on several of the headstones at the Ahavas Israel Cemetery.

The vandalism occurred days before Election Day in a swing state that both the Trump and Biden campaigns have fought for.  It also comes roughly one year after the city’s Reform synagogue, Temple Emanuel, was vandalized with neo-Nazi posters by an extremist group, including one that read “A crusade against Semite led subhumans.”

Can you imagine pro Biden forces doing something similar? Of course you can't.  What kind of subhuman defaces a gravestone? 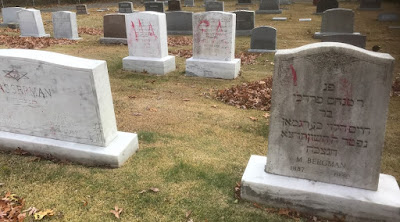 Michigan has been plagued by anti Semitic posters and vandalism for the last several years.

Homeland security officials as well as Jewish security specialists at the ADL and elsewhere have warned of extremist activity surrounding the voting. Last month, a group of extremists was arrested for plotting to kidnap Michigan Gov. Gretchen Whitmer. The alleged leader of the group is from the Grand Rapids area. The leader of another extremist group, a neo-Nazi group that vandalized another synagogue, was arrested last week in another part of Michigan.

Reporters reached out to the Trump campaign but they of course had no comment. As Don Jr. might say, just having some fun.
Posted by Blue Heron at 5:18 PM

Maggots are far better creatures than those things with a spray can.

And Jews will vote for this man! Shameful...they honestly believe he has their best interest at heart! ???

Te idea that this is some sort of false flag is ludicrous considering the history of anti semitic acts in the last several years in the area and around the country including Poway and Pittsburgh.

We are all excited about this but not about all the destruction in the lib cities of Portland Seattle new York, they did a whole lot more than spray paint. Thousands of jobs lost property ruined both Christian and Jew yet I hear no outrage. Sad

I believe that Portland was a case of opposing political groups converging on the street. But I haven't followed it closely. All political violence and destruction of property, from any side, is horrible and ridiculous. Like the tea in Boston Harbor.