Everybody is a critic, or artist 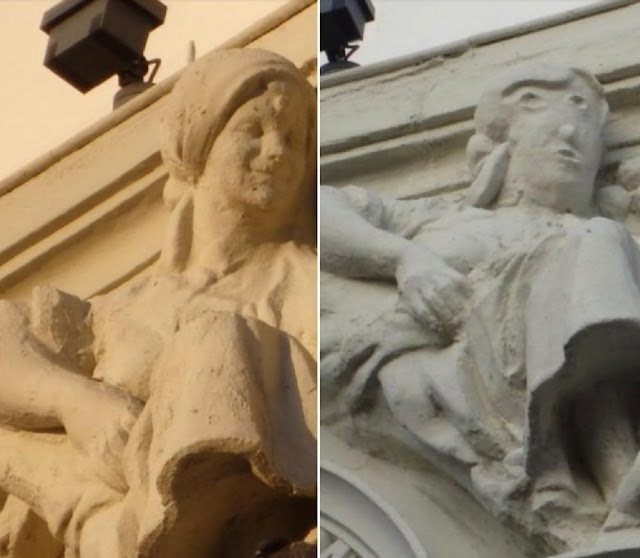 I suppose that proper restoration, like art, is in the eye of the beholder.
But people in Northern Spain are aghast at the recent touch up work performed on this bank facade, which was originally sculpted and installed in 1923.
Provincial rubes, they fail to understand that we live in a post modern time where only the very worst can now be deemed good and acceptable.
Everybody is an artist now, the ability to actually draw and to percieve spatially is strictly for squares.

This particular work has been dubbed the potato head of Palencia. See more about the restoration effort here.

I think it is almost cubist in nature but unfortunately the two eyes are not on the same side of the head. Looks more oxygen deprived in the womb. If you flattened the nose and added another eye the Picasso aficionados would probably be enthralled but the classically molded and representational arms are still a bit incongruent with the doughboy noggin. 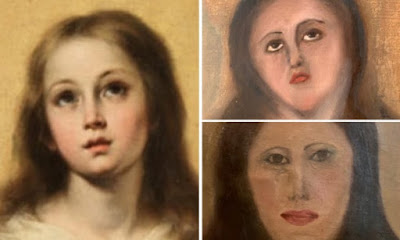 I really don't know what they are putting in the water in Spain? This ham handed debacle comes on the heels of the botched Murillo restoration. 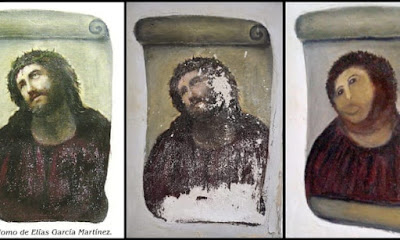 And who can forget the job they did on the Martinez fresco in Zaragoza?

In art school we called this sort of graphic flattening of a painting image "Egyptian."

I really can't envision the most clumsy Egyptian ever painting or sculpting this badly. This kind of awful takes work.

But hey, this restorer may be selling his stuff in ten years for millions of bucks to a breathless audience like Hirst or Banksy do, acclaimed as the latest sensation by the cognoscenti hungry for bad.

So once again, what in the hell do I know?