Stuck in the deep sand.

I was sifting through the election rubble yesterday and a post voting comment from a fellow in Pennsylvania stuck in my mind.

A teamster, he was a lifelong democrat who said that he would never again vote blue. The reason he stated, all the "woke" business. He didn't want to be told how to think. I may not agree with him necessarily but I get it. There is something a little bit nauseating about being lectured by self righteous people who are so sure how everybody else should properly believe. It gets very tiring. Most of us get pretty comfortable in our beliefs and with who we are as we get older and don't need or require any help.

This exercise in progressive groupthink is very off putting to some. I think we need to be somewhere in the middle, a little more woke and a little less asleep but there is a lot of room at that inn.

I have been writing this blog for over thirteen years, coming up fast on ten thousand posts (116 more to go.) For years I have been lamenting the deep split in our country, yet it seems to only be getting worse. This election, no matter which way it goes, obviously solves nothing. Mitch McConnell will stop any hope of bipartisan legislation dead in its tracks, no matter who is the president. He sees himself as a bulwark against a far left that has become too extreme, purposefully forgetting that it now encompasses a majority of the voters in this country.

If Trump is re-elected and it is still a real possibility, expect more of the sharp elbows, nasty nicknames and name calling of any who dare oppose him, even within his own party. More weaponized America. Fauci and Wray will get a quick exit and the president will double down on the authoritarian number. Wouldn't doubt that he paves a way for a Putin style lifetime presidency. And don't expect the enablers in his party to say a peep. "Just Trump being Trump, pay him no mind." 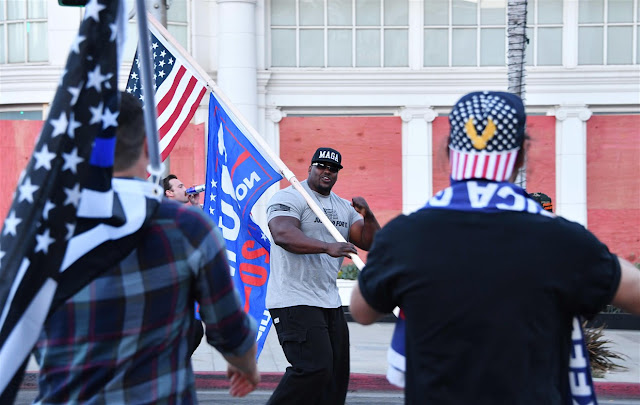 One unusual thing in this election is the nascent black and latino vote for Trump. The first doesn't make a whole lot of sense to me with all the racial dog whistling but what do I know? Perhaps a Jungian drive towards strong authority figures, the patriarchal archetype.

The Latino vote is interesting too. The anti communist Cubans and Venezuelan immigrants not having a lot of use evidently for their fellow hispanic "rapists and murdering immigrants with calves the size of cantaloupes." The difference is that they were given a political route to asylum here, the Mexicans, Guatemalans and other Central Americans never had the luxury of that route.

There has always been friction between the black and brown communities, my sister wrote her thesis on it back in 1969. The scenes of antifa and blm rioting do not play well anywhere, let alone in South Florida where the hispanic community is pretty well to do. And the billionaire black rappers sure ain't letting any democrat bitches mess with their coin and/or tax bracket.

So the more things change, the more they stay the same. We are stuck in a miasma, rural versus urban, red against blue. Little, if anything is different except that the days of bipartisanship are clearly over and both parties have accelerated towards their fringe. You can't win a primary without being an asshole and you can't get anything done after committing to your parties' worst tendencies.

If Biden should win, I don't want Bernie Sanders anywhere near the cabinet. Nor Tlaib or Omar. Warren would be a great Treasury Secretary. The dismantling of the Consumer Protection Financial Board was criminal. There are still things we can fix, hopefully we can claw back the horrible record of Trump at EPA and the Interior.

But the revolution will not be televised, in fact it has been indefinitely postponed. We are stuck with a spouse we barely speak to and hopefully the children will be on their own and out of the house one day and be able to figure it out and put it all back together again before we do each other in.

It may not be easy for Biden to fill the Cabinet. The normal way to fill the Cabinet is to get approval of the candidates by the Senate. With a R Senate, Mitch will make it tough for Biden to get folks approved. Probably no Bernie or Elizabeth. That is, unless Biden goes the route of making Acting folks as Trump has often done. Hopefully, Biden will not take the Trump route. Please return to some degree of normalcy, Joe!

some good points as always, but ALL Trumpers suck, and they don't think right (ask Leslie)

I agree, Warren for Treasury. And if McTurtle won't approve her, I say go the Acting route. You can't negotiate unless the other side understands you're willing to take action against them.

This waiting for the electoral count is nauseating. After getting a damage control squad in place (Cabinet), Biden should take on two fundamental changes to our system: (1) Abolish the electoral college - don't allow the minority populace to rule the country, and (2) Push for Congressional term limits.

My new personal pronoun is 'it'. Please remember because I will be offended if addressed any other way.