Last call at the Donnyland Corral 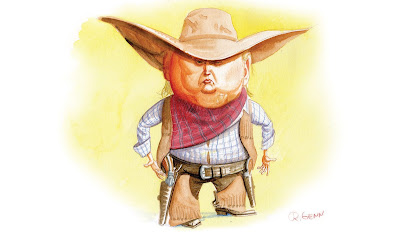 Past time for Donnie to ride into the sunset. Not so much a circular firing squad, the GOP is now engaging in full scale cannibalism.

So far the orange one has shivved Republicans Gov. Ducey in Arizona, Governor Kemp in Georgia, Georgia's Secretary of State Raffensperger, Ohio Governor Mike DeWine and Wisconsin's Robin Bishop, all loyal followers who both voted for him and supported him in the recent election.

No friendship is too important, no loyalty so dear that our President will not try to destroy it if somebody or something gets in the way of his current scam or grift.

The FBI, the DOJ, Cybersecurity Chief Chris Krebs and countless other loyal followers who have stood in the way of the Grand Delusion and called bullshit on his fraud claims are now suspect and part of the great conspiracy in Donnyland. Claims which were never brought up in court by the way because not even a Trump lawyer would risk their reputation by making them in Federal Court. Claims that were made up by the President out of thin air that he knows are false.

When asked how Trump could lose the top of the ballot and so many Republicans were elected down the very same ballot, his lawyer Jenna Ellis claimed that they were presumably in on the con and had obviously paid someone off.

All those people who maintained that he would kill his own grandma, screw his own mother and kill his own children to get what he wanted don't appear to be too far off the mark. Friend or foe alike, there is no one that he would not destroy without hesitation if they happened to get in his way. How many more loyal Trumpers are going to receive a knife in the back before this thing is finished?

"How many more loyal Trumpers are going to receive a knife in the back before this thing is finished?"

This is a good thing! That those followers didn't know it would happen in the end tells you something about their thinking patterns. I'm sure even Putin didn't lift a finger to help him this time.