A friend of mine owns some office suites in town, very nice, very well kept. Yesterday her alarm went off at 5:30 a.m., a break in. The sheriffs are wired in to the alarm system but they never showed up, which doesn't exactly surprise me, my having had a business here for several decades and them not showing up numerous times. 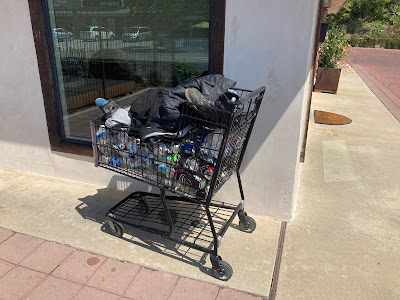 She drove down herself, arriving at 5:45. The perp was still in her store, vandalizing things and throwing her phones around. He had gained entry by breaking a glass pane on her door.
She once again called the sheriff, whose office is less than a half mile away. It took them another twenty or thirty minutes to get there.
They eventually arrested the intruder, a vagrant who is seen frequently on our streets, often seemingly very drunk. He left his cart outside her door.
She asked the officers about the long wait time and they nonchalantly said it was due to a shift change. It is no wonder that citizens take the law into their own hands, isn't it?
Posted by Blue Heron at 9:00 AM