Kenny & The Kasuals - Journey To Tyme 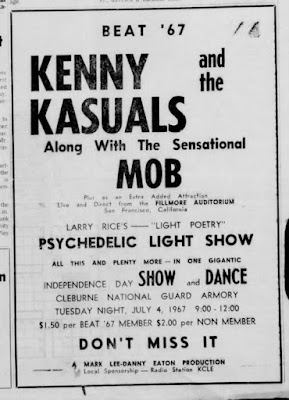 One of the best Texas garage bands, Kenny and the Kasuals formed in Dallas in 1964. They were one of the first bands with a "psychedelic" sound, heavy on the fuzztone. Got their start at the local Lamplighter Motel.
Kenny and the Kasuals were slated to open for the Beatles at Shea but had to cancel over a royalties dispute. Probably a bad decision, who knows what would have happened to their career if they had done the gig?
Read this interesting article on Texas bands for more info on the Kasuals and their Lone Star kin. Having lived in Texas from 1964 to late 1968 I can vouch for the tone and tension, especially because I was one of the few kids with long hair and I often got harassed at school.

It’s easy to forget how conservative Texas was in the mid-sixties, especially in response to all the changes going on in the rest of the country. The long-haired teenagers were refused service at restaurants and gas stations and cursed at. “We got called a lot of names,” remembers the Novas’ Dennard. “‘Fag.’ ‘Queer.’ And our hair was barely over our ears.” Ronny “Mouse” Weiss, of Mouse and the Traps, says, “We had swords pulled on us, and guns. I kept a shotgun in my car.” Gerniottis says that certain places were rougher than others: San Antonio, Victoria, and little Rockdale, north of Austin. “Rockdale was a major town for rednecks,” he says. Once, in 1966, the group did a show at a dance hall there and afterward went to a late-night cafe. “When we walked in, there was one other person there, a cowboy sitting at the counter, and he casually strolled over to the pay phone, made a call, and sat back down. By the time we finished eating, the place was full of rednecks and cowboys, staring at us and just waiting for us to say something. They were saying things like, ‘I bet they have to squat to pee,’ but not to our faces. We said, ‘Let’s get out of here,’ and walked to the car. But Pete Stinson, who was the one guy who could have taken them on, took his time, stopped at the door, turned, and gave them the double finger—he flipped them off—then ran out. We knew he was going to do something like that, so we had started the car and left the door open. He dove in, and they were all running out and piling into their trucks, and we all flipped them off and took off, floored it, and they followed us for quite a ways before turning around. That was the last time we played Rockdale.”