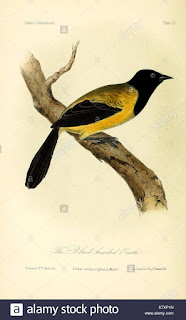 The woke's drive to institute universal political correctness continues. Do you know of the beautiful oriole known as the Scott's Oriole (icterus parisorum)?

Well, apparently old Winfield Scott, whom the bird was named for, was a military leader who drove the Native Americans off their lands in the 19th century and his name must now be similarly vanquished and denuded from the rolls.

This particular bird is not being singled out. The powers that be have identified over eighty species who should have their names changed so as not to offend the historically squeamish. See an article on the subject here.

The insect group The Entomological Society of America has over eighty bugs slated for a name change for one spurious reason or another.

Gypsy moth - gone. Offensive to the Romani people, who by the way oft refer to themselves as Gypsy. No matter. Back to Lymantria dispar, now doesn't that roll off the tongue?

Jewfish? See you, you are now the Goliath Grouper. How's that for a conversion? David, meet Goliath. I have to ask myself, how come I was never offended by this fish? What is wrong with me? Or the jew's harp either, for that matter. I guess I should be more sensitive.

McKown's Longspur? Sorry, named for a Confederate General. Can't have that.

Townsend's solitaire. No, no, no, the 1830's era naturalist John Townsend measured the craniums of indigenous people, research that has been used to identify false racist hierarchies. Let's pretend that he never existed.

The ESA article is interesting.

Referencing geography in a common name for an insect, in particular for invasive or harmful species, can perpetuate discrimination, xenophobia, and bias against people from the same geographic region. For example, throughout history, immigrants, refugees, or “othered” groups have been compared to insects or referenced in entomological terms, and a large body of scholarship has explored this pattern.  For further reading on the topic, see:

Furthermore, ESA members have reported being the targets of derogatory comments made in reference to insects with geographic common names, including being called "invasive" due to their ethnicity.

There is also precedent in other areas of study for changing names that reference geographic regions to minimize negative effects on groups or contribute to stigma. For example:

Forgive me, but my have we gotten touchy. And incredibly silly in our quest to paper over the past and our collective history, now being possessed of such nauseating self righteous enlightenment.

The world is getting rid of patronymics in general these days and I'm mostly all for it. There's a better way to describe an illness, a body part or a fish or bird than giving it the name of the man who "discovered" it. ~ Diane O

The name sensitivity is silly and senseless. We have so many immediate problems to deal with in the US, worrying about something called "gypsy" is way, way down on the priority list. People need to get some perspective.

The Curie is a measurement of a unit of radioactivity. Named for a woman of course. I have no problem with it, why does naming something after a male discoverer bother you?

I have to disagree, Diane. Rewriting history is just a waste of time and a dangerous precedent. Sure, many more men were involved in the sciences up until the last 50-100 years, so many scientific findings/inventions have that person's name attached. We can't change that - that *is* our past. We learn from it and move on.

Imagine an authoritarian future 50 years from now that decides that any/all achievements naming and honoring women should be erased. (not much of a stretch, actually.) Is that OK?

You did find one woman who has something named after her, but what a small exception. My first problem though is descriptive in nature, for instance the "Islets of Langerhans" describes pancreatic cells that secrete insulin. That name tells you nothing about the cells. Medicine in particular abounds in these things as it does in many other fields. Secondly, and as a woman I wouldn't expect you to get this right away, but when men are seen as the owners and namers of everything, it puts in the young female mind that men do the discovering, not women. They are having this trouble with AI, this "non-discrimination discrimination": when "woman docor" is a term, the AI machine recognizes that that is the exception, and all doctors are to be classified as male unless specified otherwise. Soft discrimination I know, but makes a big difference to some people who might not be men who feel they are the people who get to determine what is or is not a waste of time. ~ Diane O

There is only one country in the world named after a woman, St. Lucia but you get almost all the boats. What is up with that? And you get all the hurricanes too.

I think we have a lot more important things to worry about frankly than gender patriarchy. I don't think you can fix all the worlds imbalances in an instant swoop, it is very heavy handed. But I respect your right to your views in the most non patronizing of ways.

Peace. I basically agree that things are going a bit far, but I recognize that seeking balance sometimes make things see-saw to the other extreme at first. ~ Diane O

Get a real life america. The crap going on in the world at this rate will come to our front door, then you will have a real something to bitch about