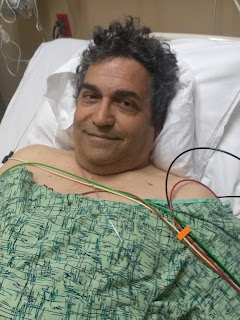 I am back home and recuperating from my recent surgery. Bed rest and no driving for three days, then restrictions on lifting objects over 20 lbs. and doing really stupid things for a while. Everything went perfect. Thanks to all of you well wishers who have been keeping tabs on me and sending me your love and prayers.

I had an ablation surgery, the electrophysiologist doctor ablated some scar tissue left over from my open heart surgery that was creating new aberrant circuits in my heart and keeping me out of sinus rhythm. Reflexively the heart tissue wants to make connections and sometimes, just like in matters of love, they don't quite work.

This procedure has about a 70% success rate for people in my condition on the first go. Often people have to undergo multiple ablations. I hope not. Will know in about six weeks if it worked.

They initially knock you out of rhythm and then map the resultant circuits on a screen. Dr. Gibson took a movie with his phone and later I watched me light up like a hannukah bush. I need to call his office and ask him to send me the file to share with you. My slightly over sized heart looked like the white whale swallowing Captain Ahab under a disco light. Actually oversized from previous murmur and mitral valve work, not some surfeit of love and compassion.

I have been in and out of the hospital probably more than anyone I know with the exception of Big Dave. Won't go through the entire litany, most of you know. I was a little nervous with this one, not sure why. Was thinking of my old friend Don Pearson, who died during a simple heart procedure. The truth is that any time you get an invasive procedure in the hospital where you get knocked out by an anesthesiologist, bad shit can happen. I am glad to be alive and awake.

The nurse did notice that my oxygen dropped way to low in the middle of the night and stuck the tubes in my nose. I have sleep apnea, as anyone who has ever roomed with me at night will tell you and I often seem to stop breathing. I need to deal with it. Another nurse said that I won't cure my afib until I get rid of the sleep apnea. Have been tiptoeing around it for too long, need to bite the bullet.

Definitely felt old when our twenty six year old nurse didn't know who John Lennon was, had heard of the Beatles but couldn't really pick one out and didn't know their music. Well, she said, until we sang Hey Jude to her and she hummed along.

Surgery is no fun, any surgery. Once again, for the fourth or fifth surgery in a row, I took no pain meds with the exception of two tylenol and gutted it out. This includes shoulder surgery and a kidney removal. It gets a bit gritty with this method but I find that you recover quicker. My pain level was never over a three on the ten scale this time but three is still a bit greater than a pain in the ass. They tap your femoral vein for this procedure, one of the insertion spots is still very tender. I have to be careful to just relax and not disturb the healing suture. Keep stair climbing to a minimum, flush system.

Great nurses, top to bottom. Had one problem with an i.v. infiltration that created a nasty bump but it thankfully relaxed and is now nearly back to normal. I know the system in a hospital, know how far to push and am a recognized expert at poaching free graham crackers in the middle of the night. Just have to learn to tie the back of my robe up a little better, was freaking out the nurses. I stated atheist for religious preference, probably should have gone with the jewish and I would have received a better kosher dinner. The asian chicken was tough as shoe leather and coated with red bell peppers, my culinary nemesis.

Picked up a bunch of new meds and now need to just read, rest and try to not to dwell on paying the bills for a week or two, put life and stress on hold for a few days if possible. Try to cut the salt intake.

I got word yesterday morning that a close friend and associate in the business took her life a few days ago. We spoke not a week ago. We had both shared intimate details regarding our mutual battles with severe depression and she had helped me not all that long ago when I was in a deep and dark funk.

People say that it is selfish and it very well may be but there comes a time when people just can't take it anymore and can't see a way out, no matter who you are and what your station in life. Everyone has a breaking point.

I know from experience that things often look different in the light of a new day. I will miss her. I am running the tapes of our last conversation through my mind over and over again, was I dismissive, was I listening, did I fail to hear the information she was trying to impart, did I act as a friend is properly supposed to act? I don't know that I will ever be able to give myself a proper answer.

She had split from her wife and was worried that they could not separately have homes that could keep their kids in the right school. So fucking sad. From the outside you know the kids would trade her for any school.  It's hard not to think about her. Fuck. We still own something together but it is the last of my worries, she helped me out when I was down.

I am reading three books this weekend, finally finishing up the Pushkin compilation, loved Dubrovsky. Got a book titled Strangers in a stolen land, American Indians in San Diego 1850 to 1880 by Richard Carrico which is very well researched and also Dale Walker's Bear Flag Rising, The Conquest of California, 1846, which I may not get to for a while depending on how much I stay off the computer.

Leslie is really taking great care of me and all is well. Thanks for caring.
Posted by Blue Heron at 10:31 AM

If I were you, I would be concerned more with the front of the robe than the back! Just sayin!

Glad you are better!

Rest and be well!

Didn't even know you were in the hospital! Marilyn ended up in the hospital after we got home with a collapsed lung and had the same problem with her IV. Something was wrong with the needle or something and her arm got really hard and painful. She's out now and says she's glad you're getting better. Be safe!

All good thoughts to you ~ Diane O

Robert, I’m so sad to hear you’ve been in the hospital but just as glad to know that you’re on the mend. I love your blog and all of your photographs. You are one terrific writer and photographer!