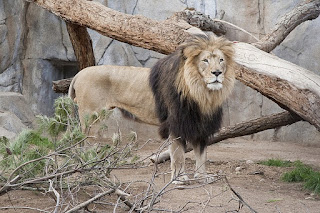 I was saddened to hear that the African male lion M'bari recently passed away at the San Diego Zoo. He was fifteen. His mate, Etosha, still lives.

As a native, I have been going to the zoo since I was an infant.  It was a different place when I was a kid, there were roosters and chickens freely strutting all over the grounds, the biggest stars back then were the black bears Yogi and Boo Boo.

Most of the subsequent changes to the zoo have been for the better but, in my opinion, not all of them. And the worst change of all was the lion enclosure situated by the gigantic Steele Elephant Odyssey.

The two lions were in an incredibly small cage, behind chain link wire, they always looked severely stressed out, as do the leopards pacing around down in cat canyon. The lions would walk the perimeter of their incredibly confined pen, spray onlookers, just never looked happy. The original multi level lion enclosure was definitely more spacious and chill. It was built in 1922, don't know why they made a downgrade change.

I have friends that hate zoos, I am a big lover and defender of my hometown zoo. But their current lion enclosure is a big fail. And adding to the stupidity was putting all the bronze dinosaurs next door in the fossil portal and adding the rattlesnake enclosure. Was that really necessary? Why waste the room? Why conflate zoology and archaeology in a time of limited funding?

We have plenty of rattlesnakes all over the place in San Diego. I personally think space for cats should trump an archaeological exhibit at a zoo. The elephants have all this room at the Elephant Odyssey and the lions get cooped up in this horrible and tiny enclosure. Having been on safari in Kenya and Tanzania, I know how much these big cats need space.

The zoo did such a great job with the Malayan tiger exhibit, hope they can one day grant the king of beasts the same sort of love and care.
Posted by Blue Heron at 9:43 AM