A San Francisco school board is voting to paint over a series of murals at George Washington High School that illustrate some of the more ignoble facets of our nation's history, specifically slavery and the extermination of indigenous natives. You can read about it here in the New York Times or here if you can't get behind the Times paywall.


The sixteen murals were painted in 1936 by a student of Diego Rivera, the Russian American painter Victor Arnautoff. Arnautoff has been condemned for being a communist but these murals of his do not depict hammers and sickles or overt images of worker's rights and communism, but instead some very real and sad chapters in our nation's history that should not be forgotten. After all that which is not remembered is more easily repeated.

A group put together to study the artwork found that it “glorifies slavery, genocide, colonization, Manifest Destiny, white supremacy, oppression, etc.” What kind of nitwit could come to that conclusion after viewing them? Rather than a glorification, they are instead a sober and honest look at our history. And a great majority of freshmen students polled were in favor of keeping the works.

But the school board wants them all destroyed, even the murals without a political message.


Mark Sanchez, the school board’s vice president, [said that] that simply concealing the murals wasn’t an option because it would “allow for the possibility of them being uncovered in the future.”

Now is that Orwellian, if not outright fascistic.

I have been reading a lot of late about the Western Expansion. It had an inherent racist and religious message. Walker's book Bear Flag Rising points out that it was unequivocally Anglo Saxon. "Manifest Destiny" was a term first coined by a New York editor named John L. O’Sullivan in 1845.

He stated used the term in the July/August issue of the United States Magazine and Democratic Review, in an article titled, “Annexation.” Manifest destiny was used to illustrate the popular idea of the need for the United States to take over the entire continent. It was the divine right and duty of white Americans to seize and settle the continent’s western territory, thus spreading Protestant, democratic values. 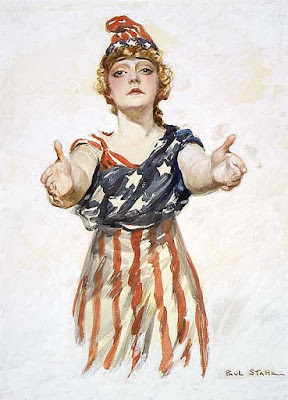 Much of this push and the impulsion towards a war with Mexico and a colonization of their lands was to stem Catholicism, which was despised by many Protestants. It is always helpful for a conquering people to enlist the help of a friendly deity and a heretic or two that needs smiting. Reducing the value of blacks and indians to less than human status sealed the deal.

In 1844  James K. Polk, a slaveholder from Tennessee, was elected President because of his promise to annex Texas as a new slave state, and to conquer Oregon.

The Angel Columbia was commonly used at the time as a symbol of the divine right of the Anglo Saxon to conquer the natives and Catholics. She would spread proper values among the unwashed west.

Interestingly much of the opposition to these murals comes from the politically correct left and not the right.


“We come to these recommendations due to the continued historical and current trauma of Native Americans and African Americans with these depictions in the mural that glorifies slavery, genocide, colonization, manifest destiny, white supremacy, oppression, etc. This mural doesn’t represent SFUSD values of social justice, diversity, united, student-centered. It’s not student-centered if it’s focused on the legacy of artists, rather than the experience of the students. If we consider the SFUSD equity definition, the “low” mural glorifies oppression instead of eliminating it. It also perpetuates bias through stereotypes rather than ending bias. It has nothing to do with equity or inclusion at all. The impact of this mural is greater than its intent ever was. It’s not a counter-narrative if [the mural] traumatizes students and community members.”

These people's myopia sounds both shortsighted and idiotic. I do not understand their logic. Anyone with a brain and an eye can tell that he is not glorifying but instead condemning. This patronizes the poor students who can obviously tell the difference as well.

I hope that the murals can be ultimately saved, at least removed and placed elsewhere. This is pure censorship and pernicious historical revisionism.
Posted by Blue Heron at 10:39 AM

I just sent this email to the SF board of education:


Greetings from a San Francisco resident:

His murals do not glorify anything, let alone things like racism and imperialism.

The murals merely illustrate America’s history for better or worse.

Please don’t try to censor or revise our nation’s history, it is what it is.

Artaunoff's murals are a teaching opportunity. Don’t hide from our history, use our past mistakes to educate your students.

Your students can handle the truth. If some are so fragile as to be offended by the murals they need to toughen up.

Destroying those beautiful and important murals in the name of political correctness is just wrong.

Can't read the article as I have "already reached my free limit of the NYT this month." Have seen the vote though and think it is so wrong.
Washington High School with WPA murals, some by Victor Arnautoff, in question because of black people picking cotton and a dead native
american being stepped over by some soldiers I think. A shame this has been voted on and is due to be destroyed. Reactionary times in an
ostensibly very progressive city. What is it all coming to?

Crazy! It’s been all over the news here. I’d spend the money on civics education.

Millard sent this over:

I have followed this one because it’s so fucking silly- Arnautoff was a left-wing 1930’s communist- when Haig Patigian insisted Arnaatoff be thrown out of the Bohemian Club- it was because he painted non-objectively- not because of his political views- Maynard Dixon resigned, too in solidarity with Arnatoff and Refrigeire’s right to paint whatever they want-

Now let’s parse the problem at Washington High- Arntoff has depicted Native American genocide by white settlers, Washington and his slaves, etc. so if that kid from the Afro-club paints a “Response mural” it will show a pro whiteman, explanation for manifest destiny, the superiority of conservative Caucasian ideals

Here’s the part that bothers me the most- $600k to paint it out- Hell, I will paint it out for 300k, spend 20 bucks at Home Depot for latex and a roller, be done in an afternoon, and then bank the 298k balance.-JPM