The Trump administration is in action again today, in the most gruesome way. A Justice Department lawyer, Senior Litigation Counsel Sarah Fabian, is trying to defend not giving incarcerated migrant children toothbrushes, soap and beds.


The government is not required to provide migrant children in custody on the border with soap, toothbrushes, or adequate bedding, a lawyer for the Trump Justice Department insisted in court Tuesday. A consent decree guaranteeing “safe and sanitary” conditions, the government argued, is too vague to be enforceable. The assertions left a panel of three judges for the Ninth Circuit Court of Appeals incredulous, with one stating plainly: “I find that inconceivable that the government would say that.”

Every time I think that we can sink to no further depths as human beings this administration surprises me once again.


The U.S. Justice Department argued in federal court this week that government agencies like Customs and Border Protection have no responsibility to provide toothbrushes, toothpaste, and soap to migrant kids who are currently held in America’s vast network of concentration camps. Human rights organizations have previously reported that migrants don’t have access to these and other basic toiletries while in U.S. detention, increasing the individual health risks and the potential for outbreaks.
The U.S. government also argued on Tuesday that making immigrants sleep on a cold concrete floor with a Mylar blanket doesn’t violate the Flores Settlement, a 1997 federal court judgment that dictates what constitutes humane treatment while in custody. The Flores Settlement says that any living facilities for migrants must be “safe and sanitary."
“You’re really going to stand up and tell us that being able to sleep isn’t a question of safe and sanitary conditions?” U.S. Circuit Judge Marsha Berzon asked DOJ lawyer Sarah Fabian.
The DOJ lawyer argued that the Flores Settlement doesn’t say anything explicitly about sleeping, and therefore the government doesn’t need to provide anything like a cot or a bed. But the judges weren’t having it.
“Or it was relatively obvious,” said U.S. Circuit Judge William Fletcher. “And at least obvious enough so that if you’re putting people into a crowded room to sleep on a concrete floor with an aluminum-foil blanket on top of them that it doesn’t comply with the agreement.”

Ms. Fabian has to win some kind of award for this performance. Just leave your decency and humanity on the counter on the way in. 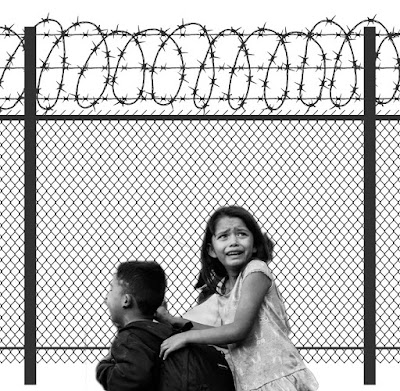 In other news reports of 250 migrants living in filthy, inhumane conditions at the Texas border.


Doctors and attorneys say hundreds of young people are living under inhumane conditions at a border control station in Clint, Texas. They say they found about 250 infants, children and teens locked up for weeks without adequate food, water and sanitation.
A researcher told "CBS This Morning" that at the Clint facility, about 20 miles southeast of El Paso, more than a dozen children had the flu, and that some were in quarantine cells without adult supervision. The researcher added that young girls were taking care of a sick two-year-old boy who was in filthy clothing without a diaper, and that the children said they were fed uncooked frozen food and had gone weeks without bathing. CBS News reached out to immigration officials, and has not yet heard back.

Remember that old Tea Party debate where the bastards were all whooping it up talking about cutting off people's access to health care? What were they screaming - Let them die! ? Still sounds like the party mantra. Children should never be taking care of other children. Or paying for the purported sins of their parents. Of course Trump says he is doing these families in detention a great service. He is, after all, bringing them back together. In jail.

*
ICE’s planned deportation raids in 10 big cities: what we know.

*
Two more Sarah Fabian stories. She was too busy dog sitting on the weekend to worry about orphan children. And she disobeyed a judges order not to destroy Border Patrol video evidence.
Posted by Blue Heron at 4:11 PM

Again, unbelievable is too kind of a word!