Kicks keep getting harder to find 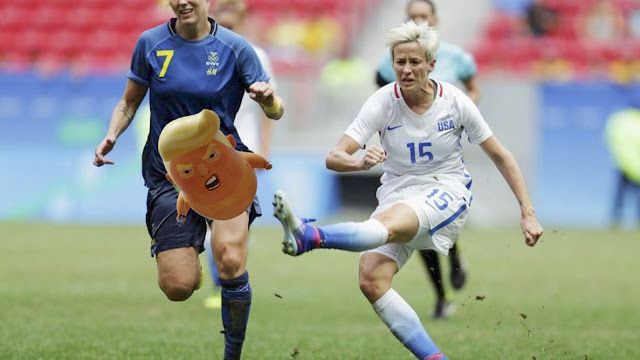 The President isn't thrilled with Megan Rapinoe's National Anthem protest. No great shakes there. I can see how the openly gay and "take no shit" player gets under his skin. What I take issue with is his statements that women soccer players don't deserve equal pay with the men.


“I think a lot of it also has to do with the economics,” Trump said. “I mean who draws more, where is the money coming in. I know that when you have the great stars like [Cristiano] Ronaldo and some of these stars … that get paid a lot of money, but they draw hundreds of thousands of people.”

As usual, Trump has his facts all wrong at least as it relates to our country. Our superlative women's team consistently brings in more revenue then the usually mediocre men's team, which by the way, has not been tearing it up for some time. Yet the World Champion women receive a fraction of the financial benefits of their male counterparts.


Rapinoe’s team has long been battling for equal pay, though it tentatively agreed to enter into mediation after this year’s World Cup. For context, per the Washington Post, the women won the World Cup in 2015 and split a bonus of $1.73 million. The men, meanwhile, were trounced in the Round of 16 — and shared a pot of $5.38 million.

The United States Women's Soccer Team is a wonder in their skill, domination and consistency. Our President is also consistent, consistently wrong. As he shows us once again.
Posted by Blue Heron at 11:29 AM