An unknown guy calls me up the other day, said he has an oil painting that he would like me to look at. "Who's the artist?" I ask. "Lockwood D--- "he says. I'm thinking the Santa Barbara artist Lockwood DeForest, and I ask him to text me a picture. People are often asking me for free appraisals and I usually don't mind helping them.

I received the picture and it was a nondescript forest painting with heavy paint buildup signed L. Dennis. The kind of colorful but dead painting that you regularly in see in mobile home clubhouses or second hand stores, circa late fifties, early sixties. They were usually painted in China or Vietnam and got produced by the bushel. 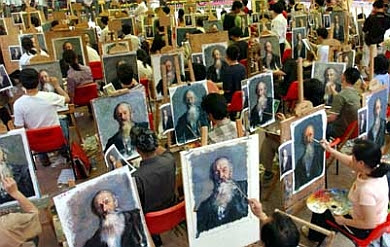 I either called or texted him back and told him that the artist was not listed and that he had a canvas that we in the business call a "factory painting." Created in towns like this. Only had what we in the trade call "decorative value." No response from him, beyond a texted "okay," no thanks.

That night, at four in the morning and change I got an angry text message; "Fuck your no listing, fuck your shitty factory painting." That was all.

Obviously my honest appraisal of his artwork was not what he wanted to hear.  He thought the painting would make him rich and I unfortunately killed his dream. He wanted to benefit from my expertise, which I gave him for nothing and then was pissed off at me to boot when he didn't like what I told him. I blocked his number.

But his tone was so angry that it actually worried me. Is it so far off to think that someone would come after me and do me or my family harm because they did not like the information they received in a free appraisal? I told my wife about the incident when she came home from Santa Rosa. She told me that maybe I can't be honest with people. Shame. It is going to make appraising really tough.