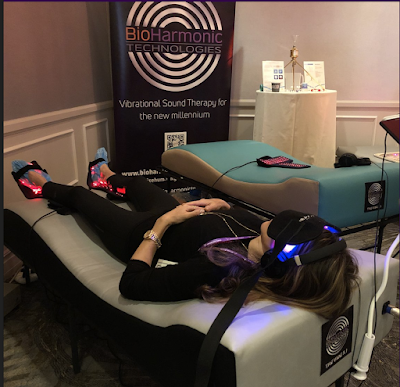 People that come to my wife Leslie's shop Caravan on most Thursdays often see a nice lady in the back named Penelope Richards sitting next to a very special bed.

The bed is a Vibe machine, short for Vibro Acoustical Sound Healing. Penelope's official title is Vibe Ambassador. The literature says that it interacts with your largest organ, the skin, with custom “transducers” that are rated to vibrate between 15-200 hz.

Leslie has been using the technology for a while. Last Thursday was a trial run for me. There are about forty different programming modes. I think I did one called Cell Cleanser.  Another is named Transformation and Abundance.

You lay down, don headphones and blinkers and sail into another dimension. Soundwaves course through your body and seemingly electrify every cell. I think that twenty minute sessions cost about a buck a minute.

I literally lost track of time. it was much more powerful than I expected and I tend to be quite critical about such matters. I encourage everyone to give it a go and make an appointment. Penelope can be reached at 760-468-8738. She won't be there tomorrow but will be back in a week. Caravan is located at 109 N. Main Ave. in Fallbrook.
Posted by Blue Heron at 5:18 PM

Thanks so much for the shout out Robert and so glad you had a positive experience! Will be at Caravan every other Thursday from noon-8pm. Been getting some phenomenal feedback and testimonials from clients and just got certified as a VIBE Technician recently. Come in for another ride! Brilliant for post op healing too.