I tried to shoot Jupiter's moons last week at opposition. It was a big fail, both with my longest lens and with my field glasses. Much of my problems can certainly be ascribed to poor technique but the fact of the matter is that I didn't have ample focal length with the camera and that my current binoculars are basically little toys, they plainly suck.

I put the word out to a few friends that I needed to upgrade my binoculars. Started to do a little research. I do way too much birdwatching to not have a decent pair.

I stopped by my good friend Bill's yesterday to get some woodworking done. Bill used to be a great picker and I told him I needed binoculars. He pulled out about eight pairs, Nikons, Bushnells and more.

I fell in love with this vintage pair of Leitz Trinovids. With the original leather case and straps. Looks like they were hardly ever used, if at all. He sold them to me for a very fair price. 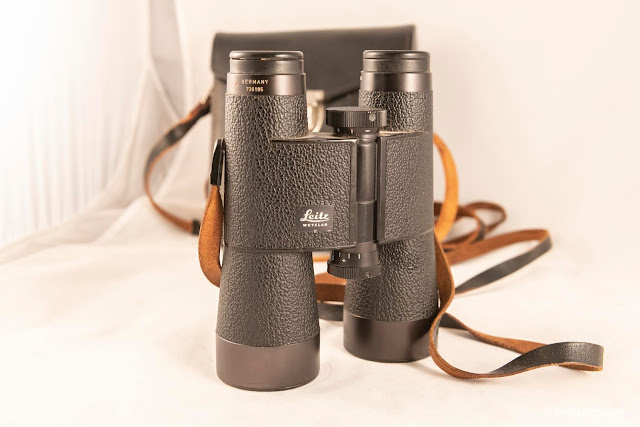 I am told that the quality control was superior back then. This binocular uses a sophisticated Uppendahl prism system, which is thought to be superior to the systems available today. The field of view is 7 deg, 122 yd / 1000 yd. Near focus is 25'. Relative brightness (glv) 16.0. They weigh a bit over 500 grams.

Leitz has been making binoculars since 1907. The company became Leica in 1986. Incidentally, their founder, Ernst Leitz, helped many jewish workers escape the holocaust.

Their products are known for their superior optics. I just tried them out outside my shop and the clarity is startling!

This product was introduced in 1963 and stopped production in 1975. It is light and sharp, and has a wide field of view. It lacks some of the modern features of current field glasses, like phase coatings and waterproofing. But I think that it will be a wonderful new addition to my favorite hobby.

If Leitz does anything right it is lens making. Their old equipment has a bad habit of performing as well as contemporary optics simply because they were maniacs about quality and nearly always ahead of their time.

The binoculars will also be heavier, making it more difficult to hold steady while viewing. birding binoculars

But which binoculars should you buy? When you go shopping for a proper pair you will likely find hundreds of models to choose from. But not all binoculars are appropriate for hunting. Best binoculars for hunting