What possesses a man to get up at four in the morning and shoot pictures of birds? Please let me know, I am freaking exhausted. But there was a confluence of events to think about. The baby peregrine falcons only started to fly three or four days ago but the window is short before the young flyers disappear from the horizon completely. I had images to capture.

I am going under the small knife with a procedure in just a couple days and will need a little recuperation. It was now or never.

I drove down in drizzly rain, arrived at Torrey Pines a little after six and walked down from the parking on the highway. I had the beach to myself. High on the hill to my east I could see two of the three peregrine youngsters bobbing on the bluff top. 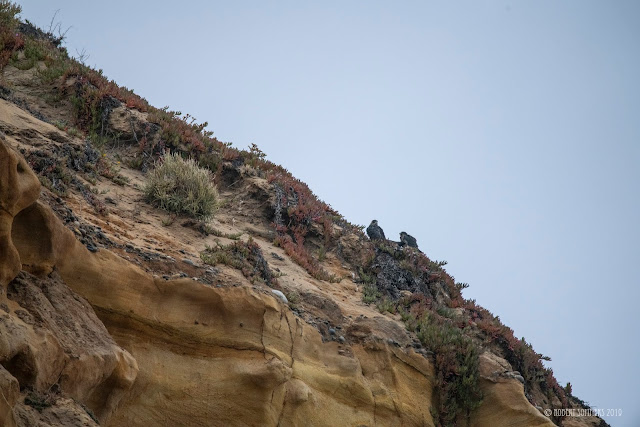 These two were not flying and I was there to see a flying display. Aerobatics, food exchanges, the whole megillah. But they were clearly not interested.

I walked back to my van and drove to the self pay for my twenty dollar pass into the Torrey Pines State Reserve. Forgot my license plate but got close. Would see if I had better luck up top.

I drove up the hill to the dirt area where people hiking the Guy Fleming trail park. I was close to the ocean bluff when I saw the adult male on a dead Torrey perch. 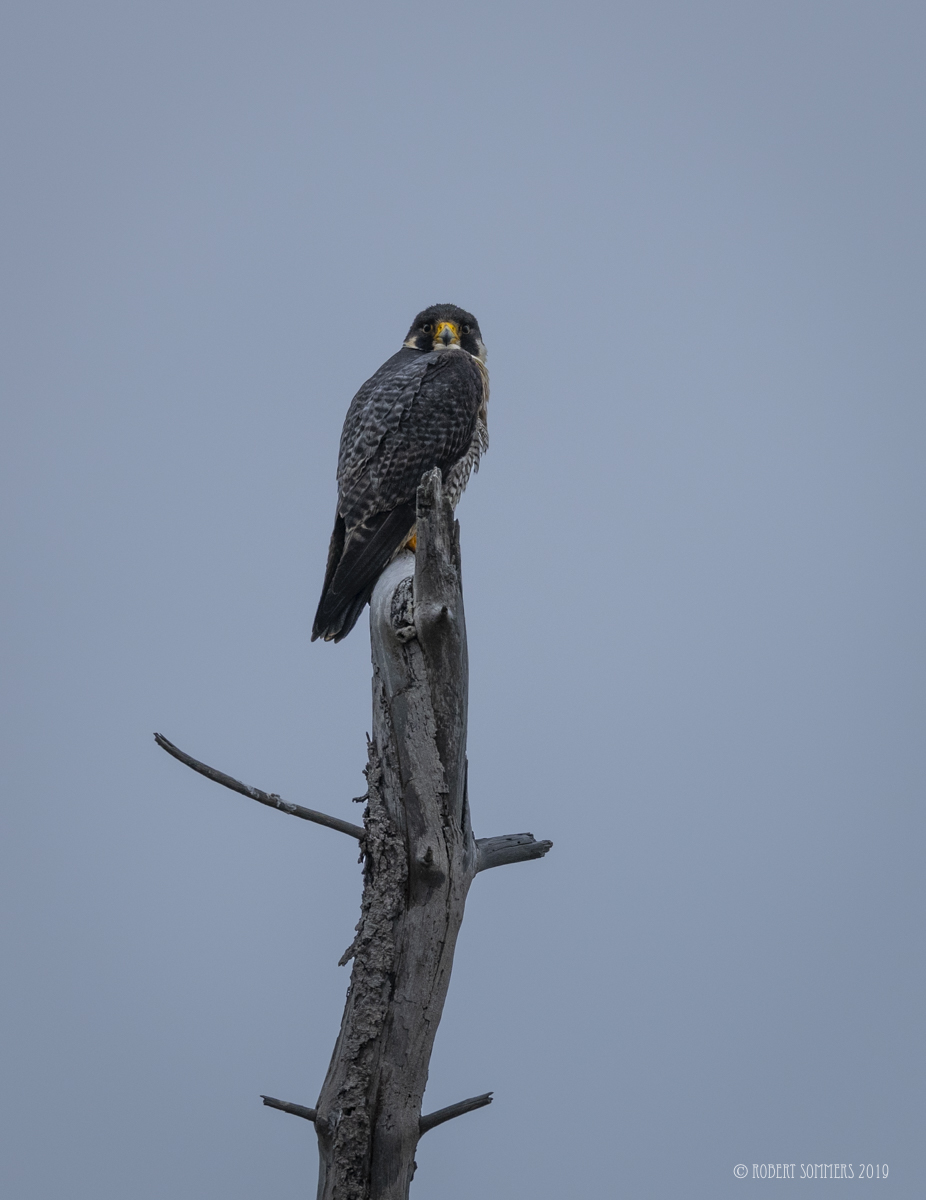 Sometimes a good sign, sometimes the only bird you will see all day. You really never know in this business. 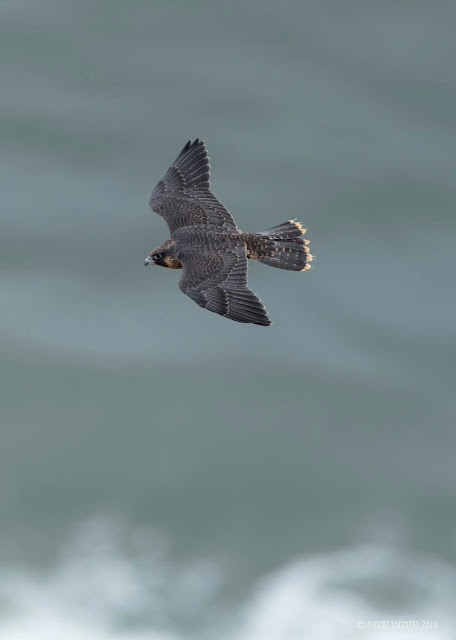 I met two or three other photographers, all bearing similarly oversized equipment. And we waited. And waited. 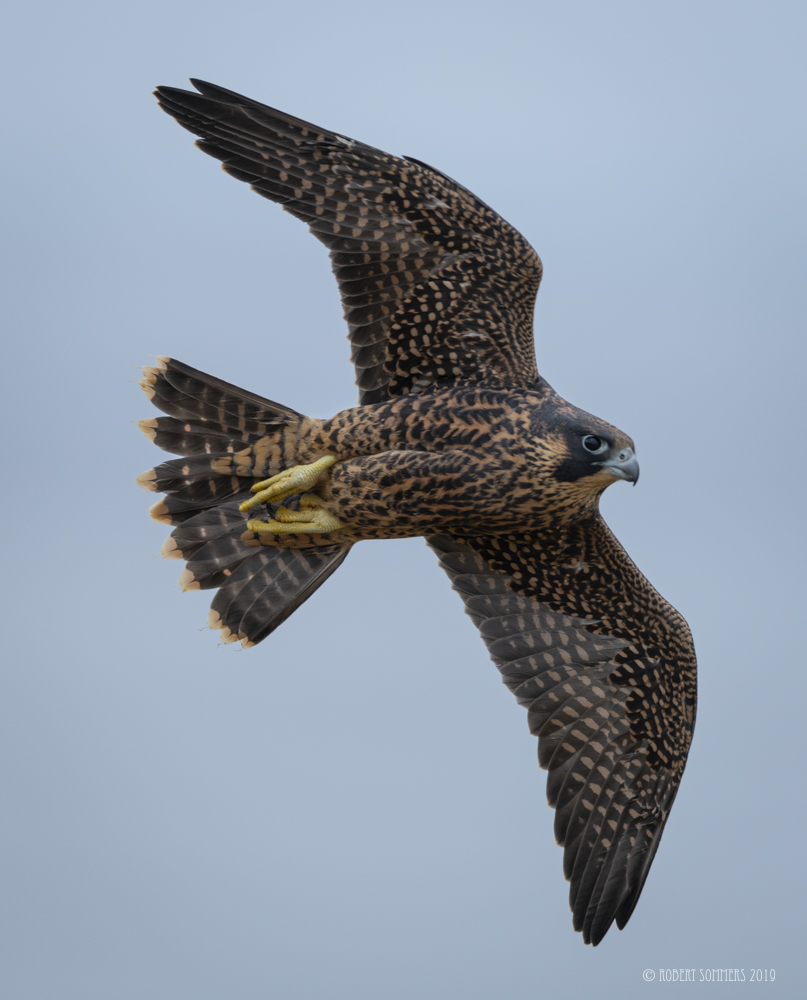 Saw birds once or twice but they were not very active, frankly they were really being quite coy. Sky stayed overcast all morning.

We had nothing to do but wait. There is a lot of waiting involved in the hunting business, whether your primary tool is a rifle or camera.

People are under the impression that we call these lovely creatures in like Doctor Doolittle but it really doesn't happen that way. Still need a dollop of luck and/or providence.

I did catch this beautiful young falcon cruise by on nascent wings. 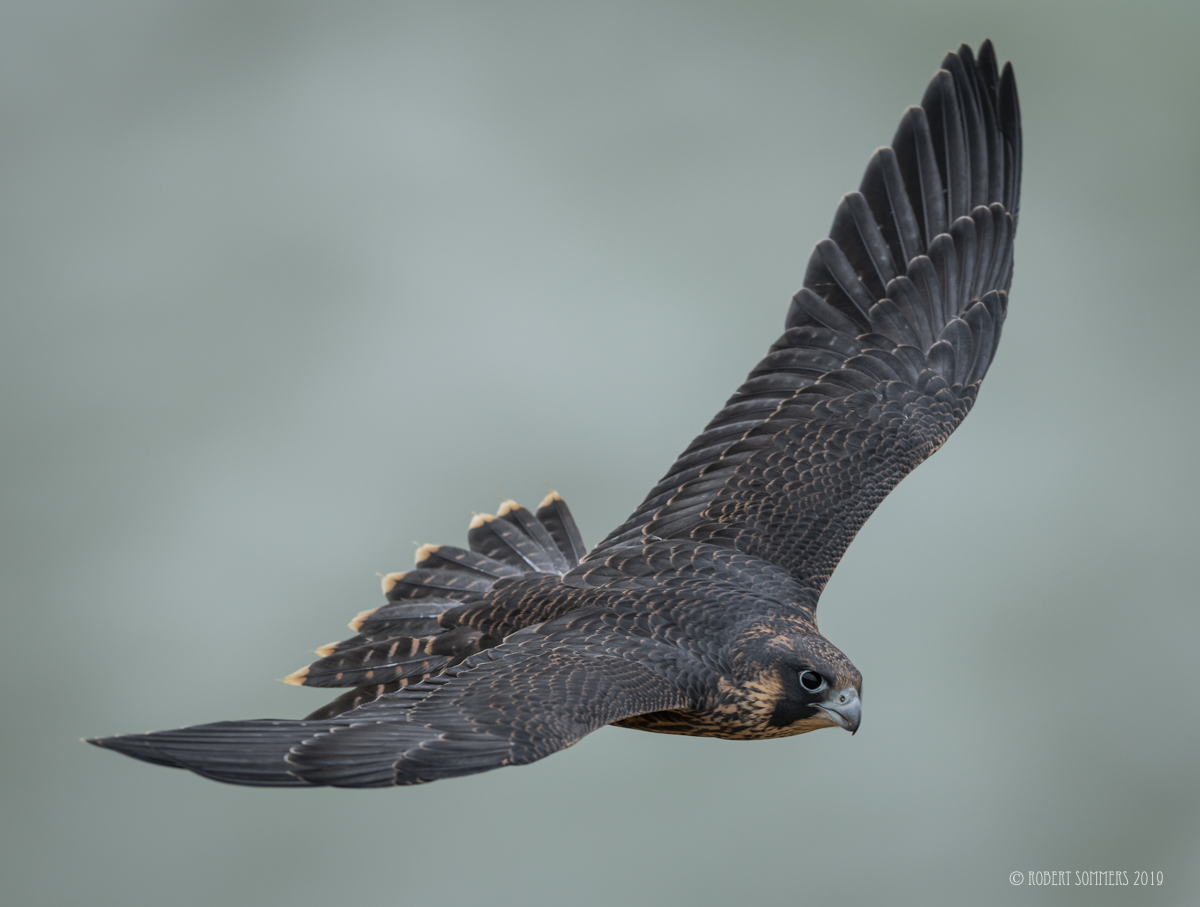 And then we waited. And waited. And waited some more. The docent Herb came by, an affable german man. He explained that one of the three progeny flew off a few days before the others, that is why I have only been seeing two birds this week.

An hour went by, then two, then three. The birds were right below us on the ledge but not active. I had met Ken in the morning, a fellow Nikoner and a retired I.T. guy. We talked a bunch about various things and he finally packed it up and headed for home.

A few minutes later a young couple came by and said there was a young peregrine perched way over in another part of the preserve. I decided to make something happen, hiked over with my heavy gear, no guts, no glory. Found nothing of course. Turned out to be a red tailed hawk.

My left knee, which is bone on bone at this point and killing me, was just about to collapse, but I decided to make one more trail loop before I too headed for the exit. 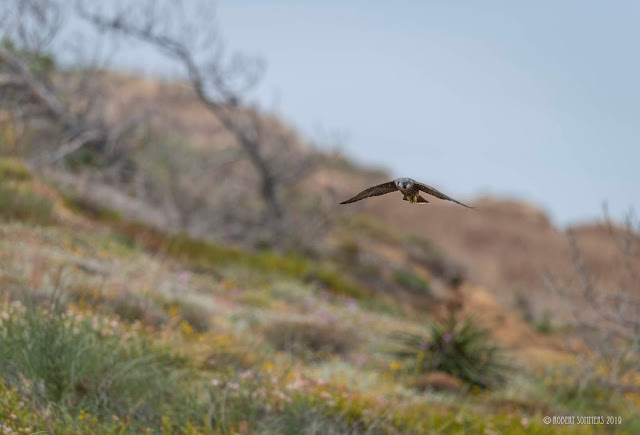 Was talking to an asian lady when a young peregrine appeared out of nowhere and sailed right toward us. The fastest creature on earth had built up quite a head of steam.

Lo and behold it swooped down to a treetop not four feet from us, so close that I was almost unable to fit the bird into my prime picture frame. Truth be told, closer than I have ever been to a falcon. Like reach out and touch somebody. 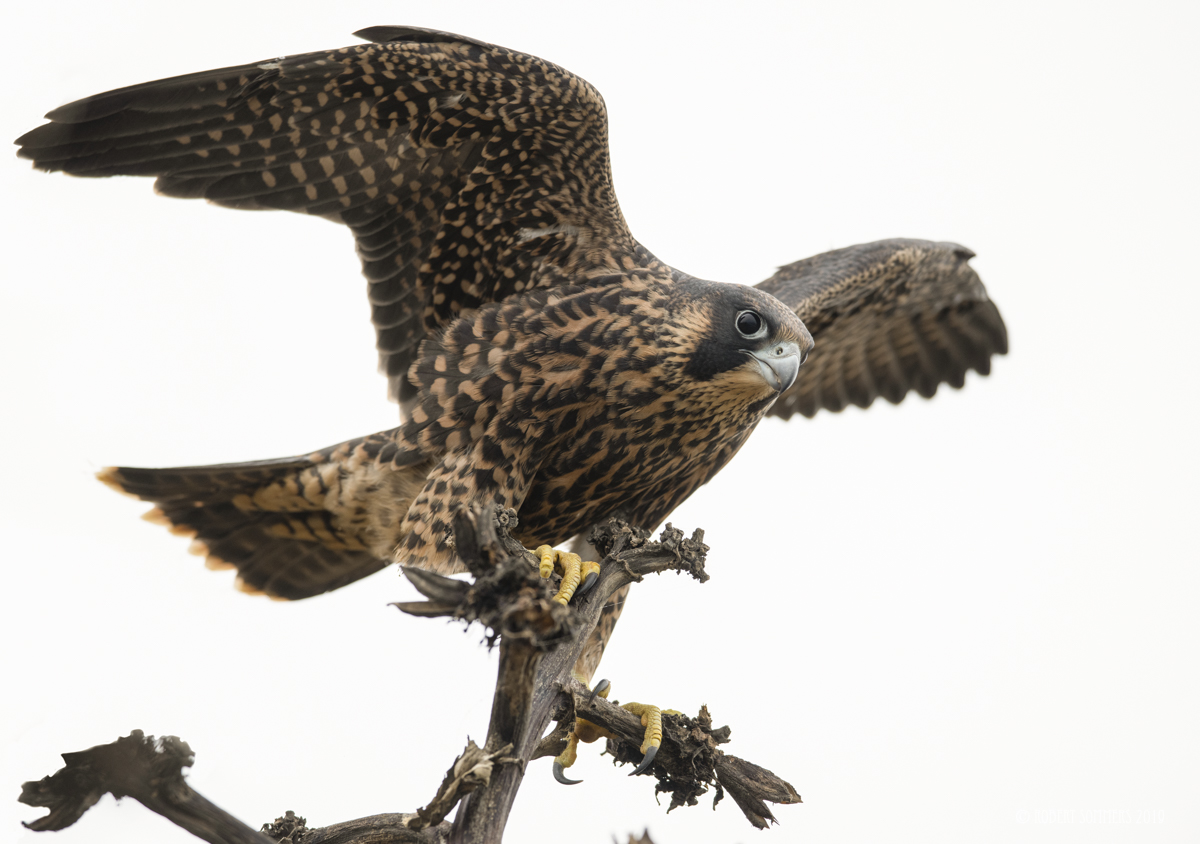 I packed it in. I got my shot, all that I came for and more. Look forward to going through all of these pictures and seeing what else is usable in the near future. 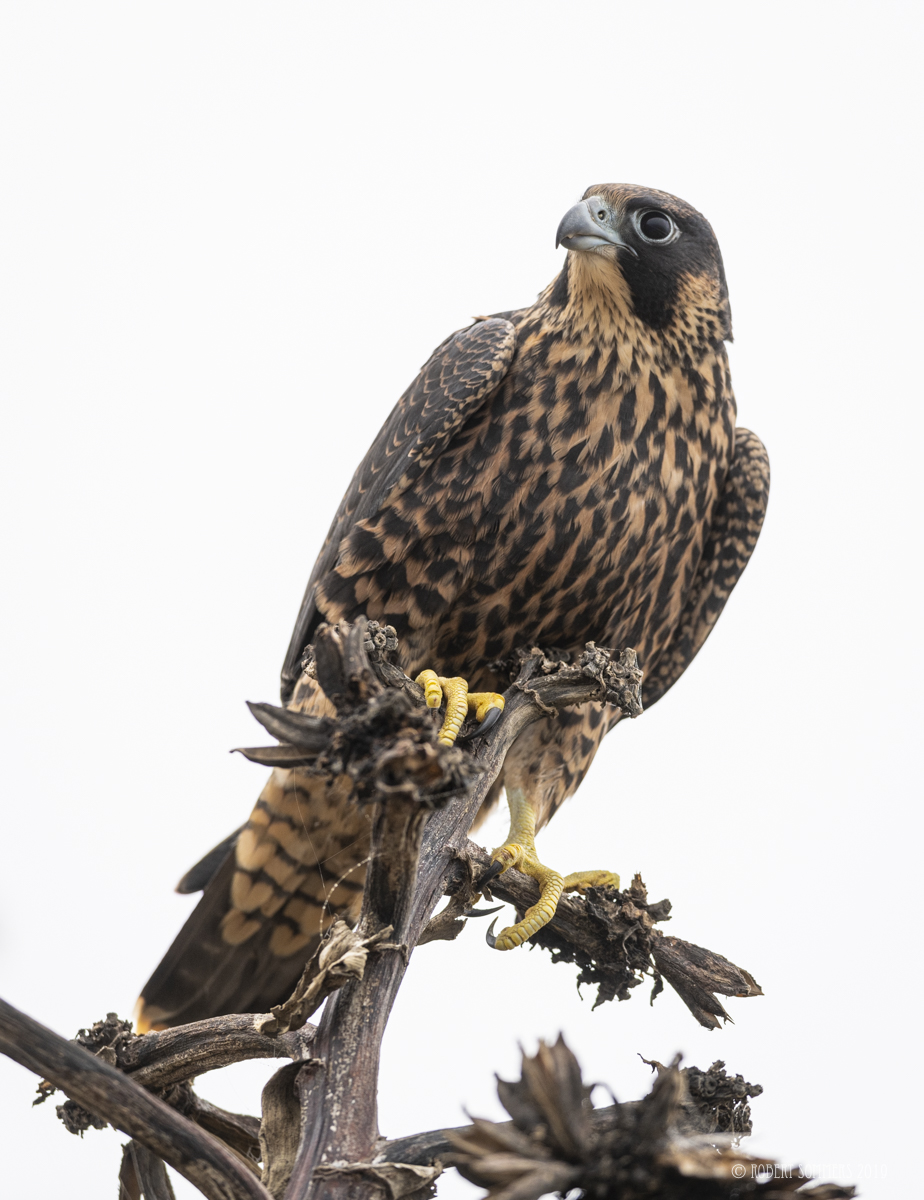 I was famished, had not eaten since I made a paltry snack for dinner last night. I called Tracy and Stanley up and we had a nice lunch at Paon in Carlsbad. I am headed home to take a nap, a successful shoot now squarely in the bag. Peregrine fledging is definitely one of my favorite times of the year.
Posted by Blue Heron at 3:44 PM

Glad you caught the close-up ... beautiful shots ... congrats, Robert! Nice talking to you today and thx for the photo tips. I met the same couple you mentioned on the way out and walked over to high point ... yup, a juvie red-tail. Good luck with your surgery. - Ken Blackford.

Honestly your photos are marvelous, every one of them. I enjoy them so much. - Diane O