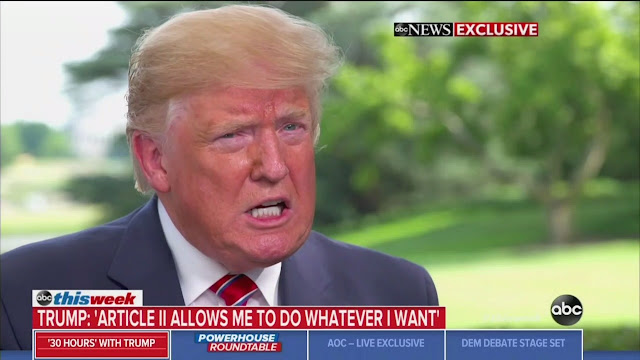 I don't want to get too far into the impeach/not impeach debate. With this particular Senate, there is no way that it will ultimately be anything but a pyrrhic exercise.

However it would be a way for people to register their dissatisfaction with this President's conduct in office, and I can see some value in that. An impeachment inquiry would allow the House to get information that they have been heretofore denied access to.

I think that there is a greater problem at hand than impeachment. I believe that we are in a constitutional crisis in this country. We are founded on the principle of checks and balances, with all three branches of government normally engaged in a grand exercise of rock, paper, scissors. But checks and balances are on life support.

President Trump does not believe in being checked. He claims executive privilege at every turn, instructs his minions to not cooperate with congressional oversight and feels he has the right to "run the country" even if it means obstruction, lying or illegality. His Attorney General also believes in the concept of an over strong unitary executive branch. He and his underlings regularly shred common norms and boundaries regarding things like the Hatch act, personal enrichment, the census question and emoluments.

The Treasury Department says that Congress does not have an appropriate "legislative interest" to see Trump's tax returns. Other departments have been making similar refrains in order to stymie investigations.

Now I personally can see a lot of value in having this President's returns. It might answer the question of why he has always been so beholden to the Russians and Saudis.

The process does not work if the person being checked can decide what constitutes proper legislative interest or intent on the part of the investigator. We have turned the whole system on its ear. I guess that the courts will ultimately have to sort it out. But what did we have, a hundred Benghazi hearings? Obama never tried to shield himself like this, neither did Clinton. Always different when the shoe is on the other foot.

Our Republic may have not been designed as a true democracy but it was certainly not designed as an authoritarian dictatorship either. Congress needs to be able to do its job and investigate the President properly without these roadblocks. The Executive branch can not decide what are proper intent and motives on the part of the Congress in their hunt for information. It would be like Boeing telling the FAA that they don't have proper or legitimate reasons to inspect their 737s.

Trump said this morning that his supporters might demand that he serve more than two terms. With a Trump friendly, ultra conservative Supreme Court that splits regularly on ideological lines, it will be interesting to see if there is anything that now legally stands in his way of becoming President for life.
Posted by Blue Heron at 10:25 AM

I think we have a fair chance of things going south enough for Trump to start alienating his supporters. The Middle East looks like it is ready for another blowout. The economy looks like it could drop into a recession and the poorly planned trade wars are pushing things downward. Foreign and domestic policy look like a combination of Trumps 1980s ideas and a big huge dose of random decisions. Immigration is a real crisis and so far the "solutions" have had no effect. Out of all this mismanagement the economy looks like it could be the first to break and start disappointing Trump supporters. A Mr. Magoo stumble into war in the Mideast could disillusion the supporters.
Impeachment though will galvanize the supporters and might make them even more illogically resistant to blaming Trump for war and recession. It provides the perfect reality TV stage for a President who is really good in TV drama. I fear impeachment will make the lefties feel good about themselves while handing full victory to the worst of us.
When the Trumpeter says his supporters may demand he stay for a third term I think he is alluding to the dark forces he wants to unleash like some banana republic dictator. Why should we help him unleash those forces?

Good read and so is Jon's.
Barbara