There's a good article in the New York Times today The Rooster must be defended - France's culture clash reaches a coop. The article is about a rooster named Maurice. Apparently the coq is ruffling a few feathers with some vacationers who would prefer to not hear him crow. 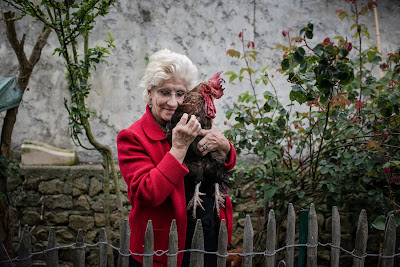 The story takes me back to a rooster story of my own, the strutting Rhode Island Red in my little tale was named Ronald.

Many years ago my ex and I raised a lot of chickens. We always had too many roosters and our usual solution was to take the extras down to the river or creek and release them. We lived in Rainbow at the time.

They would fly up into the trees and eventually would be dispatched by nature, but they would extend their life in the wild for some time and live an uncooped and unfettered existence as was originally intended by the great poultry god on high.

Anyhow this Ronald was becoming a real problem. You see he would take to crowing at any god forsaken hour, usually around midnight and sleep for us became a serious issue. Luckily we didn't have any close neighbors, living in a rural setting.

I had an idea. I called Fred Rasp. Fred was a Rainbow native and he kept an odd menagerie, knew his way around chickens. "Fred, would you like a rooster?" He said he would. "Well, I have to tell you, he crows at inopportune times. I want you to know exactly what you are getting in to." Fred says no problem. "Fred, if there are any problems, give him back tomorrow. Do not whack Ronald." I was emphatic. Fred assents, will not kill rooster, gives us his word. I took leave of my poultry, assured that he was in good hands.

I called Fred the next morning. "How are things going with Ronald?"

*
Another Fred story. I think all the statutes of limitations have expired. Had a sketchy, meth addict neighbor in Rainbow. Actually a couple of them. This particular one was sort of a bad hombre. I forget his name. Scary. And he had a pig. Not just any pig, a huge pig, 400 pounder I think. A  disgusting creature, always something foul running out of its nose. Pigs are kind of gross if not well maintained, wormy and disgusting.  This one was outre horrific.

This particular pig would get out of its pen and terrorize the valley. And he would come over to my ranch and knock over the garbage cans filled with dog kibble and eat all the food. My dogs were mean and tough but they wanted no part of this porcine invader.  Who was costing me a lot of money.

I called the speed freak miscreant once, twice, three times but the same thing happened over and over, he would not restrain his porker and he would not replace my dog food.

So the last time it happened I called Fred. Who showed up in thirty minutes with his two brothers and his father Norbert with a truck and a winch. I tell you they had that pig shot, butchered, trussed and on the truck and out of the valley in the wink of an eye. Makin' bacon. Frontier justice. Guy comes over the next day asking if I had seen his pig? Shook my head. Nope.

*
Fred's dad has passed. Actually a long time ago. He was a hell of a guy. Taught me how to beekeep. Had been a foundry worker in Los Angeles. Strong, tough as nails. Soft spoken. Used to see him and his wife at the Grange pancake sausage breakfasts.

I miss the old country folk. Now the valleys in these parts are full of plastic fencing and people to match.

Ronald was an appropriate name (inside joke for any random Ronalds out there).

It was a pure coincidence. Never quite got on with the guy.

I knew Fred Rasp and his family. It's been a long time since I've been in that part of the country. It's good to hear the old stories. I remember that Fred had an affinity for rattelsnakes and honey bees. He seemed to get along well with things that stung, buzzed or bit. Fred is quite the character. I would describe him as fearless and unforgettable.