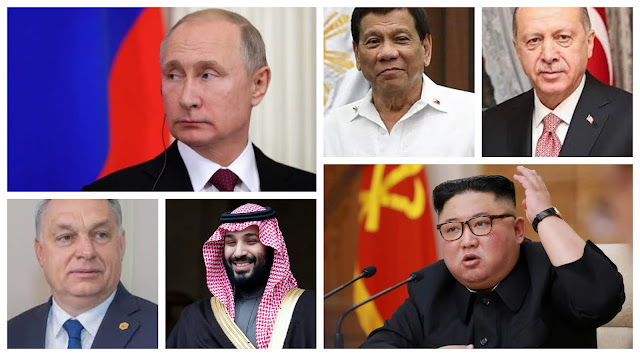 I was talking to a South American friend the other day and he was talking about the impending death of liberal democracy, the postwar model that has guided the world's countries and behavior since the end of World War II.

I think it is too early to count them all out but taking a sober and honest look at the world, its demise is not entirely out of the question.

Getting along, playing nice and working together is out, ultra-nationalism, throwing elbows and engaging in brutal pressure gambits and raw power grabs is in.

If you look at the behavior of our country's leader, just in recent months, he has destabilized NATO, verbally attacked Japan, angered and threatened our two largest trading partners, Mexico and Canada.

He has gone after Merkel in Germany and the British government and also expressed admiration for Putin, Duterte, Kim Jong Un, Bolsonaro, Erdogan, Urban, Xi Jinping and Bin Salman. His boycrushes shown above have engaged in all sorts of nasty business, from killing journalists to assassinating their own citizenry but he still gushes over them.

It is obvious that he has a love for authoritarian strongmen and that there is no love lost between him and our traditional allies. His support among his base is rock solid and shows no sign of wavering. Leads one to think that he could declare himself President for life and you wouldn't hear a peep out of the G.O.P..

You judge someone by the company they keep. If these guys, murdering thugs to a man, are your boys too, please stand up and be counted. It would be nice if you were on record.
Posted by Blue Heron at 4:03 PM