Back in your shell 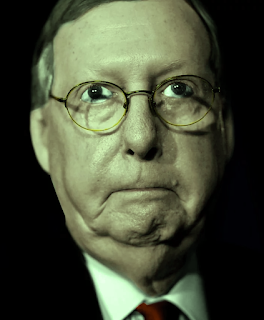 Mitch McConnell said something a bit dickish today. There have been recent revelations that his ancestors owned slaves.


Two of McConnell’s great-great-grandfathers, Richard Daley and James McConnell, owned at least 14 slaves, all but two of them women, in Limestone County, Alabama, NBC reported, citing countywide “Slave Schedules” published as part of the 1850 and 1860 censuses.The records indicate most of both James McConnell’s and Daley’s slaves managed to escape, with the 1860 census showing that all of James McConnell’s slaves had fled, as had all but one of Daley’s. The 1850 census shows that four of Daley’s five slaves had escaped, suggesting he acquired more over the 10-year period.

In response McConnell said, “I find myself in the same position as President Obama. We both oppose reparations and we both are the descendants of slave owners.” In 2007 a man named William Reitwiesner published a history of Obama’s mother’s family suggesting the future president’s great-great-great-great grandfather George Washington Overall owned two slaves in Kentucky.

Now I wasn't alive back then and what McConnell says is probably categorically true. However there is a major difference in having a relative who was raped and impregnated by a white plantation slave master and willing and voluntary cohabitation. Despicable job, Mitch. What an asshole thing to say.
Posted by Blue Heron at 4:08 PM

As a Kentucky native, McConnell makes me crazy. He's horrific - the #1 obstacle to any chance of cooperative politics in America today. He's getting challenged by a seriously great candidate (Amy McGrath) in the 2020 election, but her chances are not good - hard to replace a sitting Senator.

If I could have only one political wish fulfilled, it would be that McTurtle loses in 2020. Nope, check that. Need two wishes; have to save one for Trump's demise.