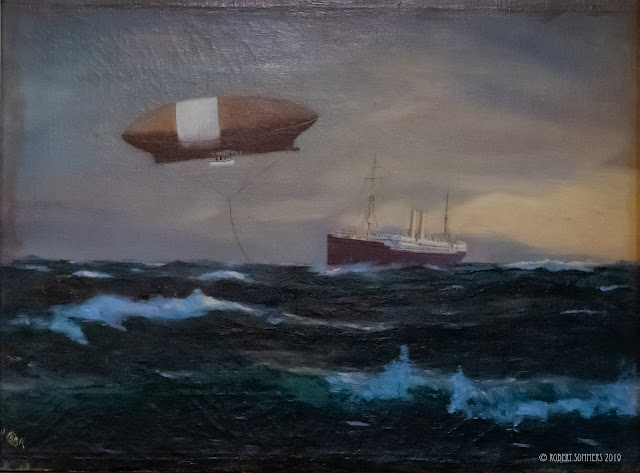 I bought an interesting painting this week, an older man was moving out of town and he just wanted to get rid of the thing. No longer had room for it in his life for some reason.

What I found intriguing was that it pictured a ship and a dirigible in the same painting. Not something you see every day. 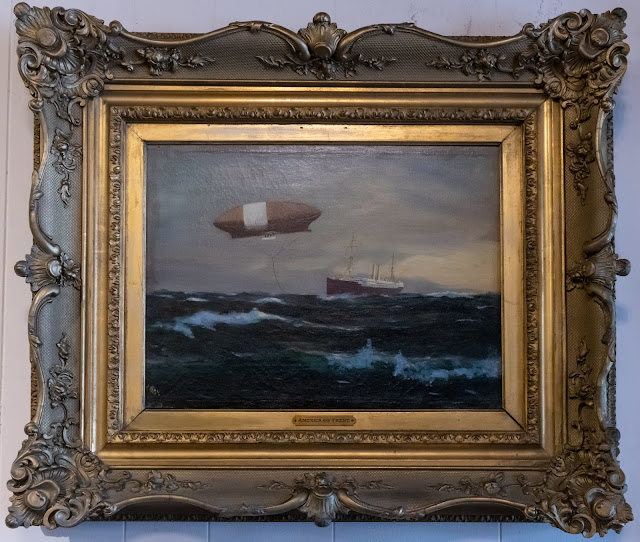 The painting is in a beautiful original frame and there is a placard on the bottom that says America and Trent.

A few things struck me about the canvas. The owner told me that he had once had it restored and the work around the edges is truly awful. May have also been put on a new stretcher.

I need my ace restorer Gary Hulbert to take a look at it.

I love these early marine paintings because they open a little window to history. My mother was a history teacher for a time and I am always fascinated in the subject.

This one captures a rare moment of time, when man was attempting to travel and circumnavigate in airships prior to plane and jet travel.

Marine artists, especially in the era before photography was dominant, were very exact in their eye and attention to detail. They had to be, because they were essentially documentarians. This was painted before the major advent of impressionism, at least in America. Most good boat paintings from the era are representational and historically correct.

So back to the painting at hand. I don't know the artist but I have a scant clue or two. I will deal with that in a moment. Almost immaterial. It is what it is. Not by a major marine painter, a Buttersworth, Salmon or Jacobson so would not be a painting for the autograph hounds who are only interested in big names.

So what exactly does it depict? What were the America and Trent? 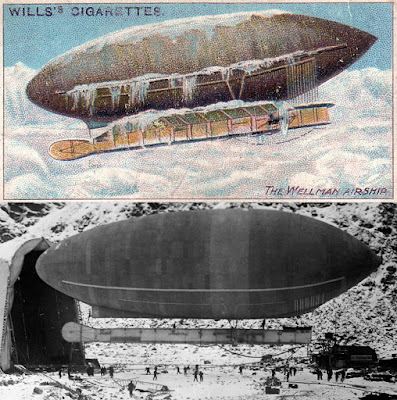 The America was the first airship to attempt an Atlantic crossing. It was piloted by two men, Walter Wellman and Melvin Vaniman, who helped comprise a crew of six. The dirigible left Atlantic City, New Jersey on October 15, 1910. The crew abandoned both the flight and the airship after 72 hours and were rescued by a passing steamship, the Trent.

Wellman (1858-1934) was a journalist and newspaper man from Nebraska. Previous to this incident he attempted three polar expeditions by land, in 1894, 1898, and 1899. He failed each time and decided to try with an airship that he had commissioned and built in France instead.

Tried three times, but it didn't work. There was one problem after another. The ship was forced down on the last go after only forty miles.

He shipped the airship back to America on the freighter Oceanic and gave up on his dreams of getting to the pole. He would cross the Atlantic instead.


At a speed of 20 miles per hour it was expected that the airship could cross the Atlantic in six days, but just four hours after departure one of the ship’s two engines failed, likely due to the lack of a flywheel to dampen vibrations. The crew decided to proceed with just the remaining engine but additional problems soon became obvious; when the darkness of Saturday night fell it became apparent, for the first time, that the hydrogen airship’s engine threw significant sparks. Because the ship had been traveling through a thick fog the fabric of its envelope was wet, reducing the danger of fire, but the hazard was obvious.
America made reasonable progress for the first two days of its flight, eventually reaching a point northeast of Cape Cod by Sunday afternoon, but as the flight progressed it became necessary to jettison gasoline to reduce weight and when the cool air of Sunday night shrank the gas inside the envelope it became necessary to drop even more fuel, along with the damaged engine, just to stay aloft.
On Monday morning the hot sun warmed and expanded the airship, causing it to ruse. According to Wellman’s account, Vaniman accidentally valved air rather than hydrogen, causing the ship to rise even more rapidly to 3,000 feet, with the ultimate loss of 1/17th the ship’s hydrogen.
The wind then changed direction and strengthened, and with only one engine the airship was pushed southward, off course, toward a point south of where it had departed.
It became obvious that the flight could not be continued: Even if the airship survived the next day, when the cool air of Tuesday night contacted the airship’s hydrogen it would not be able to stay aloft.

They sent out a distress call on Monday night, the first radio distress call ever sent from an aircraft. They also used a Morse lamp to signal their duress.

On Tuesday they attracted the attention of a British steamer on its way to Bermuda from New York, the S.S. Trent. The Ship sent out a lifeboat and rescued the men and the ship's mascot and cat, Kiddo.

The aviator Vaniman (1866-1912) was also known as the "acrobatic photographer." Born in Illinois, he specialized in airborne panoramas. He unfortunately lost his life in the explosion of the airship Akron in 1912.

*
As I said, I am not sure of my painting's author. The frame and style lead me to believe that it was painted around the time of the crossing. The name I discern is Carr with another letter in front of it, possibly a J.

There is a Connecticut marine painter named J. Gordon Carr. But he didn't paint this well, wasn't born until 1907 and conjoined the J with the C on his signature. So this might remain a mystery.

A cool painting in any case, irrespective of the painter's identity and more importantly for me, a portal to the past that I was totally unfamiliar with. Perhaps it is new for you as well.